The Powerpuff Girls is an American animation series, created by Craig McCracken and broadcast on Cartoon Network. In Belgium, the series was also broadcast on VT4 and on VTM on TamTam.

The original series has 80 episodes. Most of these are divided into two sub-episodes, but there are also episodes with a long story. There is also a film based on the series. In 2016 there will be a new series with the same title. This is also broadcast by VTM and now also VTM Kids.

The series revolves around three girls with super powers who have to save their city, called "Townsville", from monsters and criminals. The three were made by Professor Utonium, who attempted to make the perfect girl. For this he mixed "sugar, salt and everything you love" (after a well-known English saying that girls are said to be made of: Sugar and spice and all things nice). When Professor Utonium accidentally bumped into a glass barrel/bottle "Element X" that then fell into the barrel with the brew, it caused an explosion, and so the Powerpuff Girls were born.

The Powerpuff Girls are girls around five years old. They have no fingers, toes, ears, nose, eyebrows or a realistic appearance, because they have a large head with large eyes and a very small body and limbs. Their powers are very similar to those of Superman. They all have the ability to fly, superhuman muscle strength and endurance, and they can fire lasers from their eyes. Furthermore, they each have their own skill.

It is also striking that the names of all three girls start with a "B", and also in the episode where the Powerpuff Girls wanted to make a Powerpuff Girl themselves, they named their "creation" "B unny".

Blossom is the leader and the smartest of the three. She has long, orange hair with a red bow and a hair clip. She is the "pink" Powerpuff because of her pink eye color and matching dress. Blossom is someone who has the situation under control the quickest, and therefore the least likely to panic and stick to the facts, so she is also the least childish, although there were plenty of moments when she behaved just like Bubbles and Buttercup. Blossom loves reading and learning books.

Although the Powerpuff Girls are all "born" at the same time, Bubbles can be seen as the youngest of the three. Bubbles is childish and easy to scare, but she is sweet and respects everything around her. She has blond hair with two tails. She is the "blue" Powerpuff because of her blue eye color and matching dress. Bubbles is generally the easiest to beat in a fight and would therefore be the weakest, even though it was proven in an episode that Bubbles would probably be the strongest. But her lovely character prevents her from leading the way as Buttercup. She loves animals and drawing the most. She speaks unicorn language.

Buttercup is a tomboy with an aggressive character. She doesn't look much like the perfect girl but is a good help for the city. She has short black hair, green eyes with a matching dress. Because of her aggression, Buttercup can be seen as the strongest, but it is also that she is pretty stupid (not like Bubbles, since Bubbles is "childish" stupid) and therefore goes for it without a plan or strategy, like Blossom is doing. As a result, she often does something, which is usually effective. Still Bubbles looks up to her.

Professor Utonium wanted to create "the perfect girl". He accidentally made girls with super powers, not with regret, since he had them save Townsville from monsters and he played the father figure of the Powerpuff Girls. The question is how Townsville made it before the arrival of the Powerpuff Girls, since mutants and giant monsters destroy the city every day. Utonium has short, tight black hair and itself has an angular appearance, while the Powerpuff Girls have very round shapes. He has a laboratory in the basement, which he still uses often, although he had already come to the conclusion that he cannot invent anything except if it is by accident (such as the Powerpuff Girls). Despite the arrival of the girls, he is still a lonely man who wants a girlfriend, although it is not often mentioned in the episodes.

The mayor of Townsville is a small, old man with a childish (worse than Bubbles) and cowardly character. He is also very naive and loves pickles. He always calls the Powerpuff Girls with the special Powerpuff hotline (a white old-fashioned telephone with a clown face) when an attack or crime is committed.

Ms Bellum is the attractive assistant of the mayor. A running gag about her is that the viewer never gets to see her face. However, her body and the reactions of the other characters indicate that she is very attractive. Although Ms. Bellum just the "attractive assistant", she is very intelligent and always thinks carefully about the situation while the mayor has long been ready with his judgment.

Miss Keane is the teacher of the class in which the Powerpuff Girls are. She is described by the children as friendly, while in real life she doesn't seem to be that friendly. For example, in one of the episodes she showed that she doesn't like children at all. Nevertheless, she teaches well, is sensitive and follows the rules of the school. The Powerpuff Girls once tried to link her to professor Utonium.

Mojo Jojo was the lab monkey of Professor Utonium, even though Utonium did not remember him anymore. Because Bess was a rather "naughty" animal (he always demolished the entire lab), he pushed Utonium while working on the perfect girl formula that hit the Element X. That's why Mojo is actually the creator of the Powerpuff Girls. Mojo Jojo did not stay unharmed: the radiation from the explosion made his brain mutate so that he grew out of his skull, and he acquired a superintellect.

Mojo is the villain that the Girls deal with the most. He often thinks up machines and robots. Although Mojo is intelligent, he cannot compete with the Powerpuff Girls and he also has strange statements and often gets angry about small situations. Of course he is still smart, as a chimpanzee, and he also makes many machines that have often brought him almost to victory. Mojo Jojo is a dangerous figure, but he is not seen as a threat if he would just walk down the street. He lives in an observatory on an inactive volcano near the park in downtown Townsville.

He is a figure that looks a lot like a devil. It also seems that he is transgender due to his clothes, makeup and eyelashes. Because Hems real name would scare everyone so much, he is simply called "Him". Him's relationship with the Powerpuff Girls is about the same as Mojo's with the Powerpuffs, he is very dangerous in some moments and often manages to defeat them, but if they would just come and see him, he will be kind. He has many supernatural powers. Instead of using physical strength, he often tries to beat the Girls mentally. Most other villains in the series are in awe of him, and see him as their leader.

Fuzzy Lumpkins is an unknown creature who lives alone in the forest just outside of Townsville. He is extremely stingy and does not appreciate it when one gets his things, or even on his land. Fuzzy is only calm and does not harm anyone as long as he is left alone. Otherwise, he gets a rage and attacks everyone, even those who did nothing to him.

a street gang consisting of Ace, Snake, Grubber, Big Billy, Lil 'Arturo. They all have green skin and more non-human traits (for example, Billy only has one eye). What they are exactly is unknown. They play typical teenage areas, such as vandalism, street robbery and making false phone calls. Because they mostly do vandalism, they are not really serious criminals, but it happens that their "innocent" acts give them the chance to destroy the Powerpuff Girls, and they do. Buttercup has been in love with the leader of the group, Ace, until she realized she was only being used.

Sedusa is an attractive woman with living hair that looks a lot like the snake hair of the mythological creature Medusa. Her name also consists of the word "seduce", which means "seduce" and indeed is often her tactic to get something done.

The Rowdyruff Boys evil opponents of the Powerpuff Girls. The figures consist of Brick (Blossom figure), Boomer (Bubbles figure) and Butch (Buttercup figure), and all three are very annoying, aggressive and also conceited. They were initially created by Mojo Jojo with the aim of beating the Powerpuff Girls. The Girls were able to destroy the three at their first fight, but Him brings them back to life later in the series and makes them stronger. Since then they have been regular opponents of the Girls. They are made from "armpit hair, snails and a dog's tail" and the prison toilet served as the Element X.

The Amoeba Boys are three giant amoebas with eyes, a mouth and all three wearing a hat. They are just as harmless as they seem, which is why no one takes their actions seriously, since they believe that the whole city will panic by just stealing 1 orange. Although they have a friendly character, they deliberately want to commit a crime. It has only happened once that the Amoeba Boys have posed a real threat, even though nobody knew that including themselves.

The series was conceived in 1992 by Craig McCracken, a student at the California Institute of the Arts. He then called his creation The Whoopass Girls, and made a series of short films about it. The movie The Whoopass Stew! A Sticky Situation was shown in 1994 at the Spike and Mike's Sick and Twisted Festival of Animation.

McCracken sold his films to Hanna-Barbera's innovative What A Cartoon! Show, in which several short films from different makers were shown. In these videos, Ernie Anderson did the narrator's voice. However, he died before the films were converted to his own series in 1997.

The Powerpuff Girls as a series debuted in 1998, and had the best viewed premiere of all series on Cartoon Network. The series caught on with a large audience, ranging from children to adults. The series received a large merchandising, which in 2001 covered almost everything from T-shirts, toys, and video games to lunch boxes and crockery. Craig McCracken said he never expected his series to catch on so well.

In 2002, the success of the series led to a cinema film: The Powerpuff Girls Movie. This film served as a prequel to the series, showing the creation of the Girls and their first confrontation with Mojo Jojo.

In 2005, plans were made for an anime version of the series. The following year, this series, Demashita! Powerpuff Girls Z, in Japan. The series made a lot of changes to the concept of the Powerpuff Girls.

The series itself was finally discontinued in 2005. In 2009, however, another half-hour TV special followed to celebrate the 10th anniversary of the franchise.

In April 2016, a new series, also titled The Powerpuff Girls, was launched on Cartoon Network.

The series has also been nominated nine times for an Annie Award, of which he has won two. IN 2001, the series was nominated for a Blimp Award. 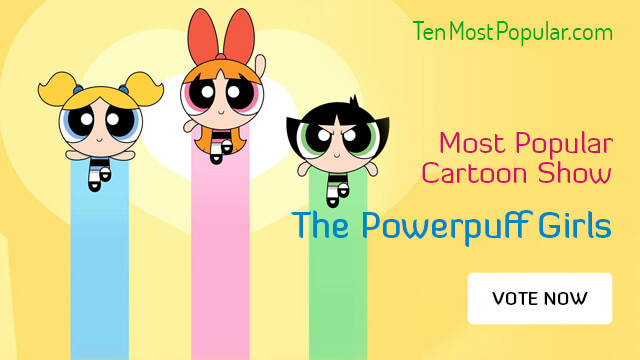