Johnny Bravo is a cartoon series, produced by Cartoon Network, and created by Van Partible within the What a Cartoon!, of which many writers and directors of this series have been famous for their own works as Seth MacFarlane, creator of Family Guy and American Dad!, and also Butch Hartman, creator of The Magic Godparents.

Johnny Bravo received generally positive reviews and is considered an icon of the Cartoon Network series. During its tour, the series was nominated for 4 Annie Awards, 1 YoungStar Award and 2 Golden Reel Award.

The series focuses on the main character of Johnny Bravo, a blond and muscular man who chases all the women who pass by him, but none heed. He constantly looks for a woman who is willing to meet him, but even when he seems to find one, things go wrong and women end up hitting him. Johnny Bravo has great resemblances to Elvis, a famous rock singer and actor James Dean.

He lives in a fictional city called Aron City. The series has references to pop culture and jokes aimed at cunning adults who would understand much of the humor of the series. The series seems to be set in the 1950s.

Origin of the series

It started in the What a Cartoon! from Hanna-Barbera. At the beginning, three pilots were issued: Johnny Bravo: The Lost Gorilla, Johnny Bravo: The Island of the Amazons and The Child of the Jungle: The Monkey Man. In July of 1997 he became a series.

The origin of the character's name was based on the full name of Van Partible, Giovanni Bravissimo Partible. The name Giovanni is equivalent to John in English and Bravissimo could be translated into English as Bravo, that is, part of Van Partible's name is Johnny Bravo.

In 2012, a movie called "Johnny goes to Bollywood" was released, part of a celebration of his 15 years. In 2011 they took short films.

Johnny Bravo: Main character of the series. He is a big man and looks like James Dean and Elvis Presley. Johnny can also be interpreted as a male representation of the "dumb blonde", with the notable exception in Cartoon Network The 1st 13th Annual Awards Anvil Fantasy Show Special Program: Live in Stereo, in which Johnny was the host and He was very witty and "soft". He is incredibly narcissistic and flirtatious who always reject him. Usually his flirting with the ladies ends with them giving him a strong blow that leaves him lying on the floor. In some chapters, they even electrocute him with an electric pickaxe or spray pepper spray, typical weapons to defend against assailants.

Johnny, despite his musculature, is not violent or conflicting, he usually uses all his energies trying to conquer girls, no matter how they are. Johnny's personality and overall physical appearance are based on a relatively unknown personal trainer from England called Shane Dickens.

Johnny's character is memorable for showing off his muscles and making martial arts movements, usually while trying to impress women. He has his hair hard because of the excessive use of gel. You always saw blue jeans and a black polo shirt (in a chapter some geeks say that because of their way of dressing and speaking they should belong to the 50s). In the whole series he wears a pair of sunglasses, but without taking them off, as a result of which in an episode he loses them in the hands of Velma Dinkley, a girl in the series, Scooby-Doo, where are you? and in another in the hands of a frog and retrieves them.

In short films broadcast on Cartoon Network, Johnny's past was shown, which turned out to be a weakling that nobody respected. His hair was originally a darker blond, until one day he was dumped in a bucket of yellow paint after he tried to flirt with a girl. The paint dyed her hair, and, when she tried to remove it with a vacuum cleaner, her hair stood still. After much exercise (to defend against those who bothered him) he formed all his muscles.

Van Partible stated in an interview for Cartoon Network that the name derives from its full name, "Giovanni Bravissimo Partible" (The Giovanni in English are told Johnny). In some episodes, Johnny gets in or falls into the water with clothes or swimsuit, showing muscular body to all the girls in the alliance. His middle name was rumored to be Boston.

Bunny Bravo: She is Johnny Bravo's mother, she has had a living past and sometimes reveals a surprising hidden talent. In the original format of the series, she portrays her as a calm and affectionate person, but once the program was restructured, she became a more outgoing and strong woman. He is very dedicated to his son, but as he knows his low intellectual level, in addition to the womanizer attitude, he does not always take his problems seriously. Like Johnny, Bunny has his own brand sunglasses that always cover his eyes. Bunny expects Johnny to find that special person he has been looking for.

Suzy: She's the neighbor of Johnny Bravo, a smart little redhead girl from the neighborhood (often called "little neighborhood girl" by Johnny). In many episodes, Suzy has been shown to have an important crush on Johnny (although the feeling is not mutual). It has many names: Karina and Aida, but Suzy is her favorite. In the first seasons she was a sweet and tender girl, later she changed her image and personality to that of a smarty. At the beginning of the series, Suzy was more like a cute and cute character with a round head, while in recent seasons she redesigned her by making her thinner, more adult looking and with a square head. Suzy has many interests (such as selling lemonade and participating in Scouts Buttercup) and has proven to be very successful in most of those interests. It's very obvious that Johnny finds Suzy so annoying that he doesn't even go to his birthday parties or school dances.

Carl: A local nerd, also known as Carl Shocker, considered by many (especially Johnny) to be very annoying. He is Johnny's "best friend". He is a genius and a geek, but somewhat eccentric and shy who sometimes uses Johnny in his experiments. He was introduced in the second season, and seems to be Johnny's only friend, although the latter often denies it. Carl likes Johnny and he continues with him to hang out, even after all the bad things Johnny says or does against Carl. He remained in the program after the return to the original style, but was relegated to minor roles.

Pops: He is the greedy owner of a local restaurant. He often gives suggestions and advice to Johnny, however, they often prove to be useless, sometimes causing Johnny problems. Their chille dinner is made of very suspicious ingredients and serves food made from many animals, such as possums, pandas, pumas, seals, horses and bald eagles. Like Carl, Pops was introduced in the second season after the drastic reorganization of the series and remained even after the return to the original format, despite being relegated to short cameos.

Master Hamma: A Japanese martial arts instructor. Johnny has had, unsuccessfully, several of his martial arts classes and often ruins Hamma's life trying to learn his lessons. Like Carl and Pops, Master Hamma was introduced after the series was changed. His rival is another martial arts instructor named Garra Panteen, who has a daughter named Ting whom Johnny falls in love with. In one episode, it is revealed that one of the reasons why Master Hamma hates Garra, is because Garra had his dojo open where Master Hamma wanted to open his, which he could not do because the city did not want to rent it.

Jungle Boy: A little boy with incredible strength, who lived in the jungle with talking animals (similar to Tarzan's). He shares a strong rivalry with King Raymond (voice of Mark Hamill, similar to Kerchak). His appearances in the series were short-lived and he and the other animals were removed from the show after season 1

Bobo: He's the only employee of Pops. He is a man with very broad shoulders and simian features who wear a green and blue mask. It is believed he was a champion in wrestling since he has demonstrated to know movements of that profession. Normally he is preparing Pops sauces, although he always says “Bobo, back” when he enters the kitchen brandishing a whip. It was introduced in the second season.

It was reported in 2002 that Warner Brothers Pictures had secured the rights to a real-image film by Johnny Bravo, where it was proposed that Dwayne "The Rock" Johnson would embody this character. However, to date there are no new developments regarding this project had been announced.

A video game titled Johnny Bravo: Date-O-Rama! It was released for the Nintendo DS and PlayStation 2. 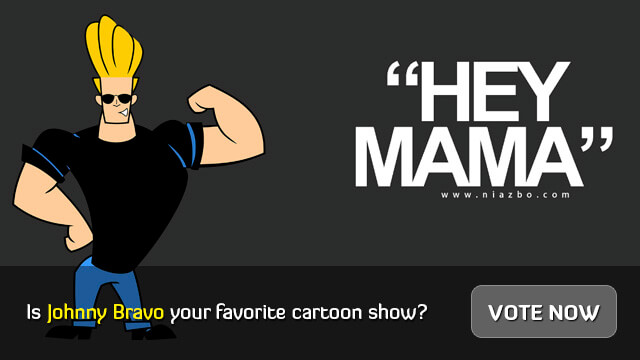