Ed, Edd and Eddy (Ed, Edd n Eddy as the original title) is acomic animated series produced by Cartoon Network. The series was released on January 4, 1999 in the United States with Canada as the producing country.

The creator of the series is Canadian cartoonist Danny Antonucci. The series was about three boys who make scams to get giant candies and will do whatever it takes to get them. Currently it can be seen on television on Tooncast. The production company of the series is called aka Cartoon, which is also the creator's company.

The series ended on November 8, 2009 after the issuance of his film in the United States, after 10 years unfinished, aka Cartoon published in the press written statements stating that the film represented the afflicting end of Ed, Edd and Eddy.

Of all the series whose original channel is Cartoon Network, Ed, Edd and Eddy is the longest, with 10 years duration.

The series revolves around three boys named Ed, Edd and Eddy. Together with other children they live in a suburb of a place called Peach Creek.

The aim of the Eddies is to earn money for jaw crackers (magic balls), and they devise the most diverse methods for this. These usually end in a failure.

Ed, Edd n Eddy was completely drawn with traditional animation until the fourth season. After that, the drawings were still drawn by hand, but digitally colored.

The series never gives hints about where the series actually takes place, or about other characters outside the regular cast. It is also noticeable that an adult never comes into the picture (although they are talked about), and that the children practically never leave the Cul-de-Sac (except in the new seasons where the Eddies have to go back to school).

The show contains a lot of references to pop culture, and the fourth wall is regularly broken. The titles of almost all episodes (except the holiday specials) contain the word "Ed" instead of another word, such as: "Stop, Look, and Ed": instead of "Stop, Look, and Listen".

Ed is the fool in the group. Based on Eddy and the official pilot episode (which was never broadcast in the Netherlands), he is 14 years old. He has one eyebrow, is far from intelligent and his interests lie mainly with monster films, meat gravy and chickens. Even if he is stupid, he has a heart of gold and will not harm anyone consciously. He is always ready for his friends. Ed has a younger sister named Sarah, whom he takes good care of and also has a weakness for despite Sarah being mean to him and abusing his stupidity. Ed's friend Eddy also often misuses his stupidity and strength for his plans to make money, since he is easy to manipulate.

Edd is very intelligent, friendly and hygienic. Based on Eddy and the official pilot episode (which was never broadcast in the Netherlands), he is 13 years old. He always has a black hat on which he only took off twice (or had previously fallen off/pulled), but when it was still not visible what was underneath. Because nobody knows what's under Edd’s hat, there are a lot of theories about this on the internet (fan fiction and fan art). The most common are: blond hair, long hair, an abscess on his head and that he is bald would be. Most would not make sense if you watch some episodes. Until now it is still unclear what exactly Edd has on his mind. Maker Danny Antonucci, promised to reveal this secret in the film, but this never happened. Edd is an only child and his parents are often away, so he only has contact with them through post-it notes that immediately indicate the chores he has to do. He is particularly bad at sport and has no condition, especially since he did not do his best in terms of sport after his "hit ball" incident.

Eddy is the leader of the group. It was made clear in an episode that he is 12 years old. He is busy every day with inventing a trick to run off the money of the other children in the neighborhood. Eddy always wants to be the center of attention and preferably as popular as his big brother when he was still living at home in the Cul-de-Sac. His love for money is sometimes stronger than his "love" for his friends, in the sense that he would sacrifice them for 25 cents. No matter how good his ideas are to get money, things always go wrong in the end.

Sarah is Ed's little sister. She is approximately 8 years old. She has a character and often yells at everyone. Her best and only friend is Jimmy, a boy who is totally the opposite of what she is. Although Sarah is a catty type, it is clear from her that she likes someone to look after, like her friend Jimmy, but it is also noticeable by her secret love for Double D, a person who, like Jimmy, is physically weak. After one of the earlier episodes where she fell in love with him, she started to write a lot about Double D in her diary. Her relationship with the other children is often confusing. Obviously, she hates Eddy, but sometimes she also takes the same hostile position to Nazz, treating each other like friends in other episodes.

Jimmy is Sarah's friend. He is around 8 years old. He has absolutely no courage and is a typical small child. He often crashes and usually has a patch or bandage somewhere on his body. Jimmy is an easy victim for Ed, Edd and Eddy, because he does not dare to stand up for himself. From Jimmy it finally became clear that he has a hidden power and can be just as cunning as Eddy. The question is whether Eddy took care of it himself when he had re-educated him in the episode where they had to look after him.

Rolf is the only foreigner in the Cul-de-Sac. He can be 14 or older. He is a figure who, despite his strange habits, is respected by everyone. While Rolf always talks about his homeland, nobody knows where he comes from. He lives on a farm with many chickens, a pig (Wilfred), a cow and a goat (Victor). Unlike most children, Rolf remains fairly hospitable to Ed, Edd and Eddy, no matter how many times they have robbed him. Rolf's curiosity for the "domestic" is often big. He also has one eyebrow just like Ed, but is, unlike him, strangely enough not called "mono-brew". His best friend is Kevin.

Kevin is the popular boy in the Cul-de-Sac. He is around 13 years old. He always wears a red cap and often cycles around the square. He is also good at sports. Kevin has a short fuse and hates Ed, Edd and Eddy (especially Eddy). He therefore appears to be the "bad guy", but his reaction to the Eddies is not always unjustified. Kevin's best friend is Rolf and he also deals with Nazz a lot. His father is known to work in a jaw cracker factory. It used to be that Kevin had long hair.

Nazz is the popular girl of the Cul-de-Sac. She is approximately 13 years old. She is attractive and stylish, and all the boys, except Jimmy and Rolf, are in love with her. Nazz seems the most mature of all the characters in the show, even though she has her moments where she comes across as the stupid blonde. She is someone who mainly sees the good in every person, so also in Ed, Edd and Eddy. She has no problems with their games. A remarkable feature of her is that she used to be fat.

Jonny is the big-headed, solitary boy of the Cul-de-Sac. He is around 13 years old. Jonny has found his best friend in a wooden board called Plank on which he himself has drawn a face. This can be seen as an imaginary friend, but in some episodes it seems that Plank does indeed have a "life". It is also possible that Jonny has a gift (clairvoyant). Jonny's friendship with an object can be a sign that he has poor social skills, while Jonny is a kind and curious child who often interferes with others.

Three sisters who later moved to Peach Creek. All children hate them and are afraid of them. Even though they were new to the neighborhood, they knew shockingly much about Ed, Edd and Eddy when they first brought them into their camper. The Drammers live in a shabby campsite, where the other children, except the Eddies, Jonny, Jimmy and Rolf (for a rescue), never ventured. They all have a different father, whose names are "Butch", "Bubba" and "Rod", but the same mother, who is known to have no high opinion about men.

Lee is the oldest sister of the Drammer sisters. She is probably 14 years old. She has curly, orange hair that is always in front of her eyes. She is the leader of the group and she prefers to be the leader of the Eddies. There are theories of her that she would have three eyes, especially after the Ed, Edd and Eddy movie was released and was shown. But this has been proven not to be true.

Marie is the middle sister of the Drammer sisters. She is probably 13 years old. Her character is nothing better than that of her other two sisters. She has blue hair that covers her right eye and loves Edd as her boyfriend.

May is the youngest sister of the three. She is probably 12 years old. She has long blonde hair and rabbit teeth. She prefers the person who fits her simple profile, Ed. On a special Valentine's Day episode, she turned out to fall in love with Double D, who gave her a Valentine's Day because Ed had rejected her. In the same episode she also showed that she was smarter than she seemed. After this episode this concept was no longer used in the regular episodes and the film, May was just in love with Ed again.

The three main characters in the series have also had guest roles and cameos in other series, such as Foster's Home for Imaginary Friends and the special The Grim Adventures of the Kids Next Door (a crossover between Codename: Kids Next Door and De Grimmige Avonturen van Billy and Mandy).

At San Diego Comic Co. it was announced in July 2007 that an Ed Edd 'n Eddy movie was going to be made. The movie would be called "Ed, Edd 'n Eddy's Big Picture Show". The film was finished on December 18, 2008 and was to be broadcast for the first time in Scandinavia on May 31, 2009. The film is about Ed Edd 'n Eddy who go looking for Eddy's brother after a list goes very wrong. 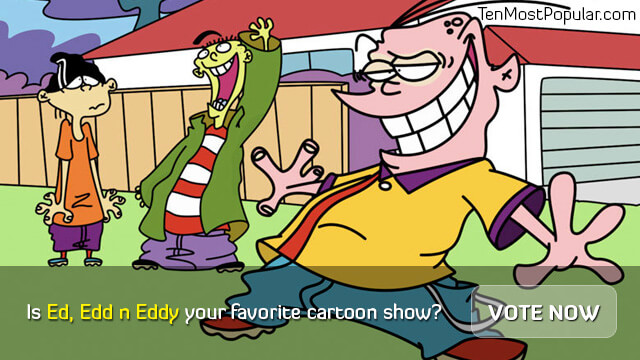