Batman: The Animated Series is a television series animated American. The acclaimed series is an adaptation of the comic book starring the superhero of DC Comics Batman. It was developed by Bruce Timm and Eric Radomski, produced by Warner Bros. Animation and originally broadcast on Fox Kids from September 4, 1992 to December 22, 1995 with a total of 85 episodes. For end fifteen episodes, the series received the title screen Adventures Batman and Robin (The Adventures of Batman & Robin), which was also used for repetitions of previous episodes. The series finally created a program then The New Batman Adventures (The New Batman Adventures).

It was praised for its thematic complexity, darker tone, artistic quality, black film aesthetics and modernization of the origins of the fight against the crime of its main character. IGN included Batman: The Animated Series as the best adaptation of Batman anywhere outside of comics, the best television comic of all time and the second best animated series of all time. The Wizard magazine also ranked him as number 2 of the best animated TV shows of all time. TV Guide ranked it as the seventh greatest comic of all time. The widespread success led the series to win four Emmy Awards, including the Featured Animated Program.

The series was the first series in the continuity of the DC Comics animated universe, generating more animated television series, comics and video games with most of the same creative talents. His success in the rankings and his critical acclaim led the series to engender two feature films: Batman: the ghost mask (released in theaters in 1993) and Batman & Mr. Freeze: SubZero (a direct video release in 1998).

The series was partially inspired by the films Batman and Batman Returns by director Tim Burton and the acclaimed Superman theatrical cartoons produced by Fleischer Studios in the early 1940s. When designing the series, creators Bruce Timm and Eric Radomski they emulated the "timelessness of another world" of Burton's films, incorporating features of the period such as black and white title cards, police aircraft (although there was no such thing, Timm has stated that he found it to suit the style of the show) and a "vintage" color scheme with black film flourishes.

The visual style of the series was based on Radomski's artwork, as well as the Gothic backgrounds and the appearance of Gothic City were based on the initial designs established by Radomski. In addition, Radomski issued a permanent order to the animation department so that all backgrounds were painted using light colors on black paper (as opposed to the industry standard for dark colors on white paper). The distinctive visual combination of images and Art Deco design was dubbed "Dark Deco" by the producers.

Initially the series used as a main theme a variation of the musical theme written by Danny Elfman for Burton's films as the main theme. The following chapters used a new musical theme, which sounded more dramatic and with less fanfare, written by Shirley Walker (contributor to Danny Elfman). The series premiered in 1992, a few months after the premiere of the movie Batman Returns. He had 85 episodes and ended in autumn 1995.

The series is more oriented to adults than to the cartoons of previous superheroes. It represents direct physical violence against antagonists, including realistic firearms (although only one character, Commissioner Gordon, was featured with a shot in the episode "I Am the Night"). For the first time, producers Timm and Radomski encountered resistance from studio executives, but the success of Burton's first film allowed the series to survive long enough to produce a pilot episode, "On Leather Wings", which, according to Timm, "he got a lot of people turning their backs on us". During the production of the series, producer Alan Burnett. He wrote a silent episode (without dialogue) entitled "Silent Night" to explore more about Batman's sex life, but this never happened. Burnett also intended to make an episode with a vampire who bit Batman to suck his blood, but the plans never materialized. However, censorship levels would decrease by the time the Batman animated film was released: the ghost mask.

The series is also notable for its supporting cast: several well-known actors provided voices for several classic villains, including Mark Hamill (formerly famous for his role as Luke Skywalker in the original Star Wars trilogy), which then succeeded in voice acting thanks to his "happily upset" portrait of the Joker. The role was originally awarded to Tim Curry, but he developed bronchitis during the initial recording sessions. Recording sessions, under the supervision of voice director Andrea Romano, were recorded with the actors together in a studio instead of separate recordings, as is typical. This method would be used later for all subsequent series in the DC animated universe. Al Pacino was attributed to the voice of Two Faces in the series, but rejected the offer. Other notable actors included Ron Perlman as Clayface, Roddy McDowall as the Mad Hatter, David Warner as Ra's al Ghul, and George Dzundza as the Ventriloquist.

One of the series best-known inventions is Joker's assistant, Harley Quinn, which became so popular that DC Comics later added it to the mainstream of Batman's comic continuity. The penguin underwent a change for the series, its appearance was remodeled after the version that was seen in Batman Returns, which was in production simultaneously with the first season of the series. New life was also given to the lesser known characters in the series like The King Clock. In addition, dramatic changes were made to other villains like Clayface and Mr. Cold (Mr. Freeze), who went from being a crazy and truculent scientist to a tragic character whose "outside frigid" hid "a damned love and a vengeful fury".

The success of the original series was such that a new series based on the original was created. The new series was first broadcast from 1997 to 1999 under the title The New Adventures of Batman, also known as Batman: Gotham Knights, reflecting an expanded cast of heroes that included Batgirl and Nightwing, as well as a new Robin, Tim Drake.

In some countries, the broadcast of the episodes of The New Adventures of Batman were combined with those of Batman: The Animated Series using the same introductory sequence, as a consequence many sources incorrectly listed them as a single series instead of two.

The 2009, the website IGN.com named "Batman: The Animated Series" as the second best animated television series of all time, only behind The Simpsons, the Wizard magazine also ranked #1 among the best Animated television shows of all time. The website CraveOnline ranked the #2 program among its Top 5 of best superhero cartoons, just behind the cartoon "Superman" of Fleischer Studios in the 1940s.

If the drawing style of the series and the hero treatment were based on the films of Tim Burton on Batman and the series Superman of Fleischer Studios, the treatment of allies and approached the supervillains of comics the '70, Age of "Ultimate Batman" where writers like Dennis O'Neil and Steve Englehart redefined and accentuated the characters.

Some episodes of the series, such as Nothing to Fear, The Demon Search, Two Faces, The Smiling Fish, etc., are perfect and virtually definitive adaptations of the hero's comics. In turn, episodes such as Ice Heart, improve the original version of the comic, in addition to receiving an Emmy award, reinventing Mr. Cold's character, leaving behind his image of a comic villain obsessed with the cold to make him a serious one and with a tragic background. The same thing happened with Robin's Revenge, winner of the Emmy Award for the best animated program of less than an hour in 1993, a chapter that is considered one of the most mature and iconic stories about the origin of Robin.

The series included many stories based on comics. The following is a list of some chapters that were comic book adaptations:

A sixteen-minute video in the video game The Adventures of Batman and Robin developed for the Sega Mega-CD, is referred to by some people as the "lost episode" of the series.

For the Spanish dubbing in America, the Venezuelan dubbing company Etcétera Group chose to use the same names as the Mexican company CINSA in the 1960s for Adam West's comedy, changing the names of the classic DC Comics characters to the from "Bruno Díaz" (Bruce Wayne), "Ricardo Tapia" (Dick Grayson), "Batichica" (BatGirl), "The Joker" (The Joker), etc.

Movies connected to the series 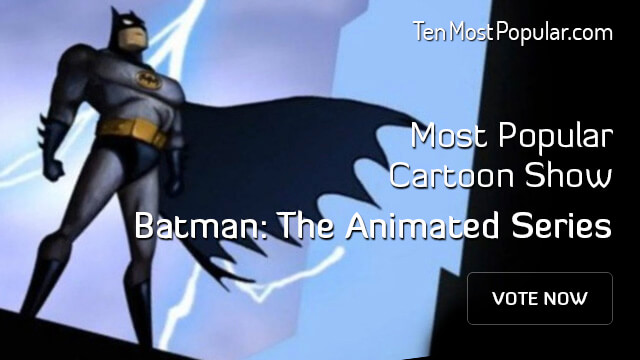