Aaahh!!! Real Monsters was an animated series of 52 episodes, broadcast by Nickelodeon.

Ickis is a small, magenta monster with a large mouth, long ears and large feet. Its size and the shape of its ears cause some humans to mistake it for a rabbit. He is the son of the great Slickis, a legendary monster from the Academy and revered by all, which has left Ickis with a blatant inferiority complex. Because of this, his scares often fail. Its style is based on its ability to inflate and to be able to enlarge its claws and fangs to extraordinary sizes. Ickis is mostly shying, insecure, neurotic, and somewhat irresponsible in his academic duties. However, in times of great need, or when he or his friends are threatened, he is capable of formidable courage and intelligence, proving that his fear of not being as good as his father is what stops him most. Ickis sleeps in aurinal.

Like the rest of his family, Krumm's eyes do not join his body since he has no head. Thus, he normally carries them in his hands, although if he requires the use of both hands, he can gently carry his eyes in his mouth. Its most valuable tool for scaring humans is the stench of its armpits (although it also has the ability to enlarge and growl). He is a great companion to Ickis on his adventures, and like him, he is not a very bright student either, but he seems to be considerably calmer and more passive than Ickis and Oblina. Despite his repulsive and filthy appearance, Krumm is very simple, good-humored, tender, joking, funny and is also very helpful in times of need. He likes kitchen appliances, in fact he sleeps in a microwave oven.

Oblina comes from a wealthy monster family, and is Gromble's best student, the director of the Academy. Her body is like a cane of sweet black and white, with a pair of large, red and removable lips. One of her favorite methods of scaring humans is by taking out her internal organs, but she also has the ability to transform her body almost at will. On many occasions, Oblina is the voice of reason. She cares about her friends and always looks for the logic of each situation, although sometimes her cunning and intelligence are not effective for her. She is strong-willed, bossy, somewhat grumpy, and that's why she often ends up arguing with Ickis.

Gromble is the intimidating headmaster of the monstrous school who shows his tough love by belittling his students to poor scares. He is a tall, grayish monster with two tufts of head hair, a beard and a tail wearing a belt and a red shoe on each of his four feet, Gromble is very prone to fits of anger that force him to wear the academy almost with a military discipline. In a controversial move in the first episode, Gromble can be seen eating one of his students in a bite (although he spits it out after chewing on it).

Snorch is a seemingly unintelligent, large human-level monster who punishes students who break the rules. Some of the punishments that Snorch has given are dancing and listening to human music. It is later revealed that he is actually quite smart when he gets an artificial voice box. This is quickly destroyed, leaving him unable to speak properly once again, due to his torturer status (similar to that of a prefect), he is greatly feared by students only zimbo remains at his side.

Zimbo is a monster that looks like a bee with a mammal leg and a humanoid face with green hair. Due to his small size and ability to fly, he works as a spy for Gromble, reporting some disobedient behavior from the other monsters. Also, he is the only one who understands the speech of Snorch, his only friend, although his friendship seems more motivated by the interest and benefits that come with protecting Snorch.

Simon is a selfish hunter who has dedicated his life to capturing monsters, particularly Ickis, and proving his existence to the world. Despite his unemployment status, Simon is actually quite wealthy, he seems to have a lot of money that he uses to hire other hunters to do his job.

Slickis is the famous dad of Ickis. He is mainly featured in the episode "Chip off the Old Beast". Ickis is always under stress to maintain his achievements, until he discovers that even his dad had a difficult time at school.

Horvak is Krumm's father and not only does he look like Krumm but he also carries his eyes in his hands. He literally lost one to the Battle of Lexington when a man mistook him for an enemy and fired the first shot of the American Revolution. As such, he wears a black glove in that hand. He started working as a farmer after being left out of Monster Academy, although Krumm believes he left willingly. He is the bearer of a family curse that he called "The Curse of Krumm" that affected him in losing his horrendous stench.

Mom Gromble is painfully an overprotective mother, and she insists on treating her child like a child.

Sublima is the mother of Oblina. Oblina calls her "mumsy" but Sublima normally makes Oblina call her "most esteemed mumsy", a pop culture reference by American actress Joan Crawford. Sublima does not like to scare and wants Oblina to leave the academy to learn how to take care of the family fortune.

Skeetch is the father of Oblina. He is skinny like her and is the most understanding of her parents. He is proud of Oblina, whom he calls Rayas. While Ickis and Krumm's parents appear identical to them, Oblina takes on the features of both her parents (the black of her mother and the color of the strips white, eyes and lips, and the cane shape of her father). This may be a hint about how each monster has its own look.

It is an American animated television series about young monsters in training, developed by Klasky Csupo for Nickelodeon. The series ran for all four seasons in Nickelodeon's main United States and was re-released on Nicktoons.until 2006. The series focuses in particular on three monsters (Ickis, Oblina, and Krumm) who attend a monster school under a city dump and learn to scare humans. Many of the episodes work out around monsters that surface to perform scares like class assignments. The series appears to take place in a landfill outside the New York City area, most likely in New Jersey. Contrary to the vast majority of animated productions, the three main voices (Charles Adler, Christine Cavanaugh and David Eccles) recorded their lines together in the same studio.

Duration of the series

From October 1994 until around the year 2000, Aaahh!!! the Real Monsters were on the Nickelodeon screen of the United States. Then in 2002 the broadcast began on Nicktoons. In 2006 it was removed from Nicktoons (formerly known as Nicktoons Television) and is now occasionally shown on Sundays by "Nick Rewind". It often appears on Nick.com's Turbonick, an online programming broadcast. In the UK, Aaahh!!! the Royal Monsters still remain at Nicktoons every night at 9:30 pm. In Germany it is broadcast from Monday to Friday at 11:45 pm on the common "Nick". In Latin America it was broadcast only in the feed on Nick Hits.

From 1995 to 1997, the select episodes of Aaahh!!! The Real Monsters went on sale on VHS and also an official DVD of the series. Mattel produced a series of action figures Aaahh!!! the Real Monsters in 1995. Other cartoon-based products include business cards, books, plush toys, and videos. At one point, the company Molinos Generales also included small, promotional books by Ickis, Krumm, Oblina and Gromble on their cereal. In 1995 Microsoft made computer games and games for Game Boy Color also came out.

After the 1998 hit "The Rugrats Movie", Nickelodeon had plans to make an Aaahh!!! Monsters of Truth for cinema. However, the production of the film was closed because the story was deemed too dark for children. 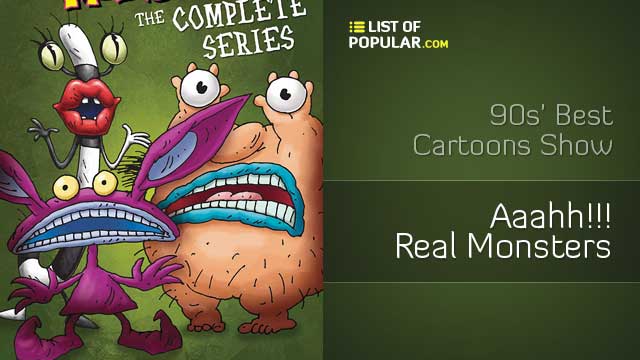