FacebookTwitterWhatsAppEmail
Walker Smith Jr., better known as "Sugar Ray Robinson", was a professional American boxer. He was active in the 1940s and 1950s, and fought in the middle and welterweights. He was inducted into the International Boxing Hall of Fame in 1990.

As an amateur boxer he achieved a record of 85 wins by no loss, with 69 of his victories by knockout and 40 of these ended in the first round. In 1940 he became a professional at the age of 19 and in 1951 he had a record of 128 wins, one defeat (against Jake LaMotta) and two draws, with 84 knockouts. He held the welterweight world title from 1946 to 1951 and won the middleweight title also in 1951. The following year he retired, but returned, to regain the title of middleweight in 1955, becoming then the first boxer in history to win for the fifth time a world championship, when he returned to win the medium title in 1958. He was named boxer of the year twice during the nearly 26-year sports career.

Robinson was named the best fighter of the twentieth century by the Associated Press. ESPN.com named him the best boxer in history in 2007. The magazine The Ring named him "the best pound for pound boxer of all time" in 1997, and "Fighter of the Decade" in the 1950s Muhammad Ali considered Robinson as the best boxer pound for pound of all times. Other boxers like Joe Louis or Sugar Ray Leonard shared the same opinion.

"Sugar Ray Robinson" is at the 17th Position in this list. 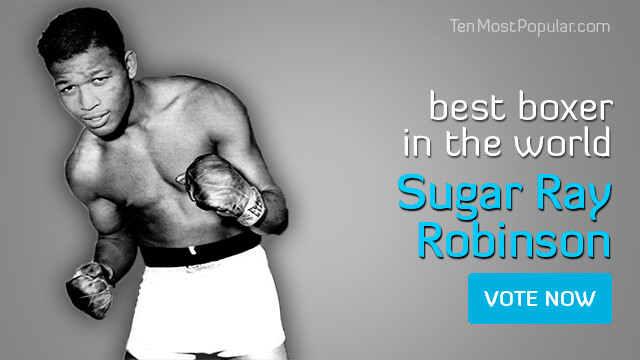