FacebookTwitterWhatsAppEmail
Rocky Marciano was an American boxer of Italian descent. Marciano is a heavyweight world champion between the years 1952-56 and the only heavyweight champion who quit without ever undefeated boxing world.

Marciano is the son of Pierino Marchegiano and Pasqualina Picciuto. He began his career as a professional competitor in 1947. He won his first 16 knock-out matches, 9 in the first round. His biggest breakthrough in the arena occurred on July 12, 1951 when he met former legendary world champion Joe Louis. Marciano won a brutal knockout in round 8. The following year he won the world title by beating Jersey Joe Walcottto KO in the 13th round in a heavy struggle. Walcott himself had dropped Marciano in the first round. Marciano defended the title in the next 5 times, the last being against classmate Archie Moore, who Marciano won in the 9th round knockout. After the match, Marciano resigned with a statistics of 49 wins (43 to KO), 0 was delayed and 0 lost. Marciano was chosen as Ring Fighter of the Year 3 times, only Muhammad Ali won the award many times. Marciano also won this year's match from the same magazine 3 times in a row, between 1952-1954.

Unlike other heavyweight champions, Marciano took his personal life without any scandal. He died of a plane crash on the eve of his 46th birthday. Marciano is one of the greatest boxing history legends.

"Rocky Marciano" is at the 14th Position in this list. 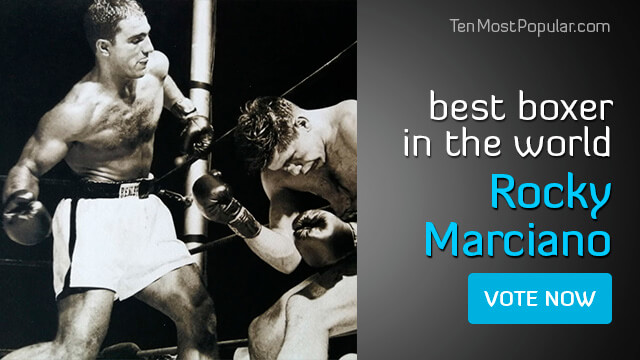