FacebookTwitterWhatsAppEmail
Oscar "The Golden Boy" De La Hoya (born February 4, 1973 in Montebello, California, USA) is a former American professional boxer of Mexican descent. He is the first boxer to win a world championship title in six different weight classes. He was in the 2000s as the last boxing superstar and is married to the Puerto Rican pop star Millie Corretjer. The couple has two children together. De La Hoya is also the father of three other children of three different women. Among others is his ex-wife Shanna Moakler the mother of one of his children, Atiana Cecilia.

Oscar de la Hoya was soon given the nickname "Golden Boy" because of its filigree boxing technique and appearance, which became his trademark. He is a magnet in the United States and earned during his career exchanges, with which only Mike Tyson and Lennox Lewis could compete.

"Oscar De La Hoya" is at the 7th Position in this list. 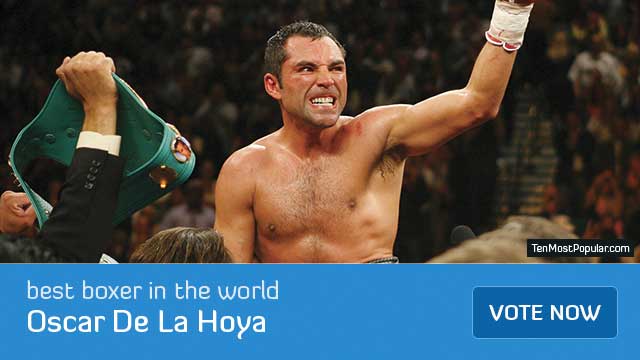