FacebookTwitterWhatsAppEmail
Muhammad Ali (birth name Cassius Marcellus Clay Jr., born January 17, 1942 - died June 3, 2016 at age 74) is a former professional boxer from the United States who is widely known as one of the most significant and famous sports figures of the 20th century. From the beginning of his career, Ali was known as an inspirational, controversial and influential figure both inside and outside the ring.

Clay was born in Louisville, Kentucky, United States and began boxing at the age of 12. At age 22, he had won the Heavyweight World Championship from Sonny Liston in a fight in 1964. Not long after that, Clay converted to Islam and changed the name of his "slave name" to Muhammad Ali and leave a message for African American racial pride and resistance towards white dominance during the African-American Civil Rights Movement of the 1960s.

In 1966, two years after winning the heavyweight title, Ali refused to take up military service for the United States Military Forces, and opposed American involvement in the Vietnam War. Ali was later suspended, and his title was revoked by the Boxing Commission. He successfully appealed to the United States Supreme Court, which reversed his sentence in 1971. At that time, he could not fight at all for nearly four years and lost his top performance as a boxing athlete. Ali's actions as an opponent of the war made him a great icon for the rival generation.

Ali remains the only heavyweight world champion three times, he won the title in 1964, 1974 and 1978. Between 25 February and 19 September 1964, Ali was named the Heavyweight Boxing World Champion. He was dubbed "The Greatest". In 1999, Ali was awarded "Sportsman of the Century" by Sports Illustrated.

"Muhammad Ali" is at the 1st Position in this list. 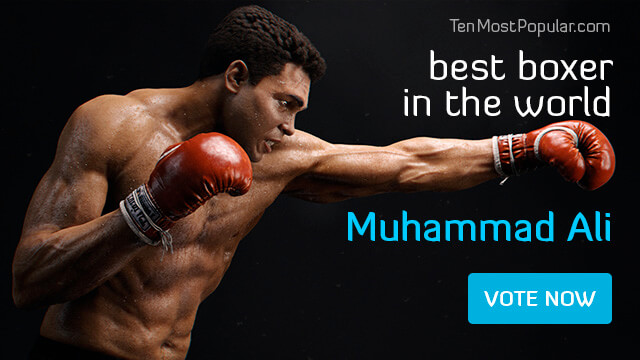