FacebookTwitterWhatsAppEmail
Julio César Chávez (born July 12, 1962 in Ciudad Obregón, Mexico) is a former Mexican professional boxer. He won his first 87 bouts in a row, 75 of them by K.O., And thus achieved an unrivaled record in professional boxing. He is a former WBC super featherweight world champion, former lightweight WBC and WBA lightweight world champion, as well as a former IBF and two-time WBC light welterweight champion. In 2011 he was inducted into the International Boxing Hall of Fame. His son Julio César Chávez junior is a former WBC middleweight champion.

Chavez, like most Mexican boxers, completely relinquished an amateur career and became a professional in 1980, at the age of seventeen. His first professional fight he played on February 5, 1980. He beat his first 44 opponents in construction battles. On March 4, 1981, however, it came to a fight against Miguel Ruiz (3 wins, 9 defeats), which was a long time after him. He struck at the end of the first round and was immediately disqualified. The Boxing Committee of Culiacan, who belonged to his manager Ramon Felix, changed the result later in a "knockout victory".

"Julio César Chávez" is at the 42nd Position in this list. 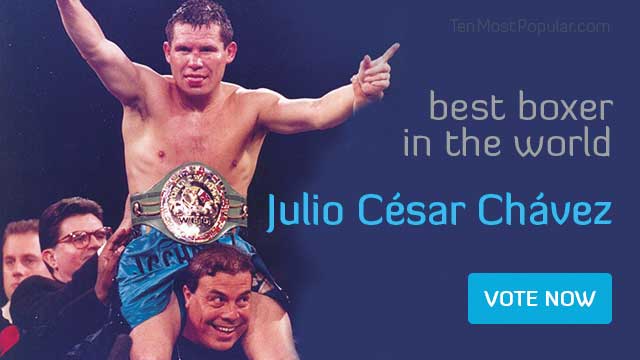