FacebookTwitterWhatsAppEmail
Joseph Billy Frazier, also known as Joe Frazier was an American boxer. Frazier, nicknamed "Smoking" Joe because of his smoking habit, won a gold medal at the 1964 Tokyo Olympics. On February 16, 1970, Frazier won the WBC and WBA world titles for the first time after winning a TKO over Jimmy Ellis. As a world champion, Frazier had faced all the heavyweight boxing champions of his time such as Muhammad Ali, George Foreman, Jerry Quarry, Joe Bugner, Oscar Bonavena and George Chuvalo.

On March 8, 1971 in New York, Frazier won a number over Muhammad Ali while defending his title in a battle dubbed the Fight of the Century. However, Ali avenged his defeat from Frazier on January 28, 1974 with the victory of numbers. In the deciding match in Manila, October 1, 1975, Ali again defeated Frazier. At that time, Frazier's coach, Eddie Futch, threw a towel into the 15th round because Frazier lost his eyesight for a while. The brutal match was remembered as Thrilla in Manila.

Frazier lost his title after losing TKO in the second round to George Foreman, in a match in Kingston, Jamaica, January 22, 1973. Frazier again faced Foreman on 15 July 1976, but Frazier lost again with the TKO in the fifth round. Frazier hung boxing gloves in 1981. In total, Frazier's record is 32 wins, one draw and four defeats. The four defeats were when facing Muhammad Ali and Foreman, each losing twice.

"Joe Frazier" is at the 11th Position in this list. 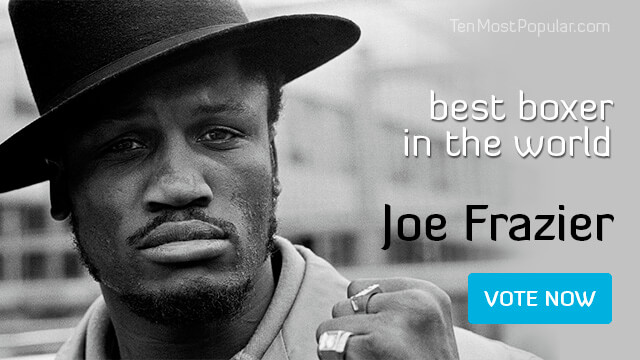