FacebookTwitterWhatsAppEmail
William Harrison Jack Dempsey was an exceptional American boxer who held the title of world champion heavyweight between 1919 and 1926. Jack Dempsey, whose baptismal name was William Harrison Dempsey, was born in Manassa, Colorado. Dempsey left home at the age of 16 in order to try a better life for himself.

In his early career, Dempsey made some fights under the pseudonym "Kid Blackie", however, he later decided to change his name to Jack Dempsey in a tribute to the great champion Jack Nonpareil Dempsey. His first known fight, under the nickname of Jack Dempsey, occurred in 1914, when Dempsey drew with Young Herman in a six-round bout. After his inaugural fight against Herman, Dempsey posted a six-knockout win streak before suffering his first loss to Jack Downey in 1915. Dempsey then went through a delicate career, where in a short time he accumulated more three draws, two of them against Johnny Sudenberg and a third against his nemesis Jack Downey. However, after his second encounter with Downey, Dempsey's career began to take off as he set a fine sequence of ten straight victories, including knockout victories against Johnny Sudenberg and Jack Downey.

Dempsey's aggressive style and destructive power made him one of the most popular boxers in boxing history. Agile, strong and rather aggressive, Dempsey used hard combinations and blows to undermine his opponents, who were not often taller than himself. In addition, Dempsey, who was right-handed, was also able to take a left-footed stance during a match, which confused his opponents too much and helped to make his potent left hook.

"Jack Dempsey" is at the 4th Position in this list. 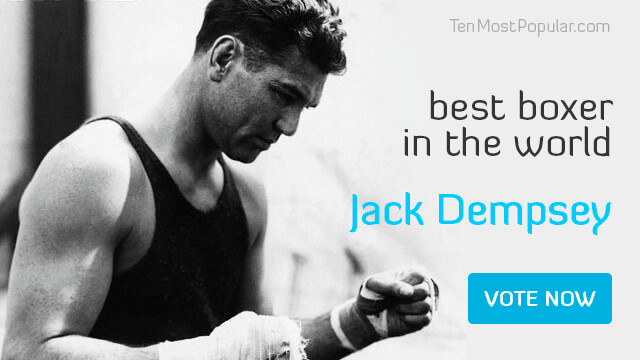