FacebookTwitterWhatsAppEmail
Floyd Mayweather Jr. (Floyd Joy Sinclair (born in Grand Rapids, Michigan, USA) was a boxer nationals of the United States. From July 18, 2005 to June 2, 2008 he was rated by Ring magazine as the number one boxer in the world. Mayweather has won six world boxing championships in five different weight classes, he is a former WBC middle class champion, a title he left in his retirement. He was named Ring Magazine Fighter of the Year in 1998 and 2007. Mayweather is an undefeated boxing athlete with 40 wins including 25 knockouts.

Floyd Mayweather Jr. born in Grand Rapids, Michigan. His father, Floyd Mayweather Sr., is a former middle class competitor. At his amateur championship Mayweather had a 84-6 record and won the Golden Glove national championship in 1993 (at 106 lb), 1994 (at 114), and 1996 (at 125 lb). He was given the nickname "Pretty Boy" by an amateur teammate because he had relatively few scars, a result of father's defensive techniques (Floyd Mayweather, Sr.) and his uncle (Roger Mayweather) who had been taught to him.

In an orthodox defensive position, Mayweather like James Toney often use 'shoulder roll'. Shoulder roll of the old school technique in the boxing world where the right hand is usually lifted a little higher than usual, in this position the right hand is usually used to block the punch or cover the no defense part of the right cheek, left hand in front, and left shoulder raised on the cheek to cover the chin and the left cheek. From this position, Mayweather usually blocks, slips, and diverts most of his opponents during a blow, even when cornered, turning left and right following the beat of their punch. This type of fighting usually uses counter techniques to hit opponents, because boxers like this prefer to buy time and make the opponent's breath run out first.

"Floyd Mayweather Jr." is at the 6th Position in this list. 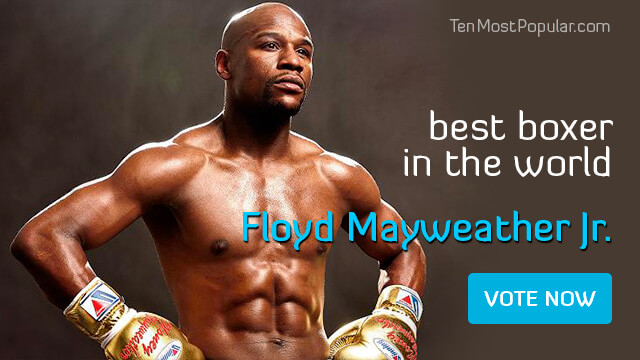