FacebookTwitterWhatsAppEmail
Evander Holyfield (born October 19, 1962 in Atmore, Alabama) is a former American professional boxer and both undisputed heavyweight and cruiserweight world champion. He has been nicknamed The Real Deal over the course of his career, meaning The One and Only. He is the only boxer in history to become a heavyweight world champion four times (WBA, WBC, and IBF in 1990, WBA and IBF in 1993, and WBA in 1996 and 2000). He is a former WBA, WBC and IBF Cruiserweight World Champion, as well as former WBC, WBF, four-time WBA and three-time heavyweight IBF heavyweight champion.

Holyfield initially wanted to make a career in American football before he turned to boxing in high school. As an amateur, he played 174 fights, of which he won 160 and only fourteen lost. In 1983, he finished at the Pan American Games in Caracas second place in the light heavyweight division, after he was inferior to the Cuban Pablo Romero.

In 1984 he won the prestigious Golden Gloves tournament and qualified to participate in the same year's Summer Olympics in Los Angeles. He was there as a favorite for the victory in the light heavyweight class, but was disqualified in the semi-final against New Zealander Kevin Barry, later manager of David Tua, highly controversial for beating after the round gong and had to be content with the bronze medal.

On November 9, 1996, it finally came to the planned years battle against Mike Tyson for the WBA title. Tyson had first recaptured in 1996, the World Cup title of the associations WBA and WBC, but the WBC title given because Lennox Lewis mandatory challenger was (comparable to Bowes resignation of the WBC title in 1993) and Holyfield after his knockout defeat against Bowe was considered a clear outsider. Even a nearby fight against Riddick Bowe, who had just knocked out Holyfield, Tyson did not aim. Holyfield, who had been at Main Events all his career, had to join Tyson's promoter Don Kingsign to get the fight. Given the knockout defeat against Bowe and his alleged heart problems Holyfield was considered a blatant outsider. The Ring Magazine laconically predicted: "Holyfield has no shot. Tyson KO1". The betting odds opened accordingly at 25 to 1, then went down slightly to 16 to 1 in Tysons favor. In a survey of the Las Vegas Review Journal, 47 out of 48 journalists count on Mike Tyson.

Holyfield, however, was well prepared for this fight: Among other things, he spared with the advancing in the world's top David Tua, whose stature and fighting style Tyson resembled strong. Especially in the close range this opponent centered training itself should pay off. Holyfield presented itself throughout the fight in great shape, boxed tactically perfect and defeated Tyson sensationally by technical knockout in the eleventh round. He was thus after the legendary Muhammad Ali only the second boxer, who managed to win three times a recognized world title in the heavyweight division. In contrast to this, he was by no means a linear world champion every time.

The rematch on June 28, 1997 ended with a scandal, The fight was stopped after the third round, after Tyson, who had lost the first two rounds, had bitten his opponent a piece from the right ear. Because of this gross unsporting behavior, the challenger was disqualified and suspended for one year.

On 8 November 1997 Holyfield defeated his former conqueror, the IBF title holder Michael Moorer, who went down five times in this rematch, sovereignly by technical knockout in the eighth round and thus reunited the world title of two out of four most important boxing federations on itself.

With a fight against Lewis, however, he had it not so hurry, he defended the title first against the rather weak rated Vaughn Bean, who had also caused problems in 1997 Moorer, and only achieved a points victory. He also intended to box against Henry Akinwande, who failed with hepatitis.

"Evander Holyfield" is at the 19th Position in this list. 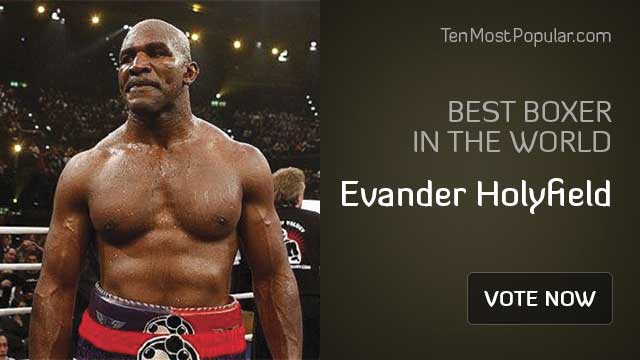