Kim Saigh (born 25 June 1973 in Westlake, Ohio) is an American tattoo artist and television person. She is best known for her American tattoo series LA Ink. Kim Saigh was born in Cleveland, Ohio. Kim remained in Chicago from 1994 to 2006 and pursued her early tattoo career. She worked in Innocent Productions from 1996 to 1999 with Aitchison. Kim opened her own tattoo shop "Cherry Bomb Tattoo" in 1999. Kim came to Los Angeles in 2006 to give a new direction to her tattoo career. In 2009, Kim opened a memorial tattoo in Los Angeles with her boyfriend, Shawn Barber.

In an interview, Kim revealed a lot about her life. Read her full interview:-

I've done thousand of tattoos in my life, and everything from the time the tattoo goes from a drawing, to being on the person's skin, is compeletely chaotic for me, but the second the needle hits the skin, everything in the world drops away.

I was kind of a punk-ass kid I would ditch school all the time. My grades were awful like they kind of went from s to like DS and E's within the course of a year and I just listened to heavy metal and my friends were poems I like the last heavy-metal kid at my school I never felt like I fit in any conventional career path it was suggested to me early on and you know you have to fumble you have to find your way it might hurt, it might not be easy, it might not be the right thing out of the gate, but you have to struggle and you have to figure out who you are and what it is you want.

I was terrified the first time I went in a tattoo shop, but I had drawn a tattoo for a friend and he took it showed it to them. They're like, this is a cool drawing, did you do it, he's like no my friend did. She's sitting outside they were like she and they came out and they're like did you draw this and I'm like, yeah and they're like we'll draw something they don't think they belive that I could draw anything, so I sat and I drew like a troll or something like that and they're like she can draw like if we taught you to tattoo would you want to learn? And I was like I just fell in my lap. But there were many a days where stroked tubes and mop floors and you know I remember one week where I didn't have any appointments scheduled until the end of the week and I had about $20 to last me like five days and I made it work and those are the times that you remember and those are the times that are meaningful and they show you that you can be resourceful.

I ended up in California after a divorce and after just kind of meeting enough people in my life I got asked to try out for LA Ink being on TV was just so uncomfortable for me on so many levels but it ended up being just such a great thing because this shop wouldn't have happened me and Sean wouldn't have happened you know my life wouldn't have unfolded the way had I not done that show so I'm actually very grateful for it.

Today I'm starting a sleeve on Mara, it's composed of cats shoes and the ditch flowers.

We've been to anywhere from like six months to a year but I would think at least seven or eight sessions on something like this and about five to seven hours a pop, so it's going to take a long time you.

You do have to take breaks permit at times because it's pretty heavy. You're putting something from them on someone you're hoping that they're okay with that decision they've made. It's intimate you're giving your energy they're receiving it's intense.

I've started practicing yoga when I was 25, it's so great to have something that you can just focus on that solid week I didn't think I would like it. But I fell in love with it you're so in your body when you're practicing and I really actually feel people get something very similar out of getting tattooed I think it's the most that they're in their body with no distractions and they can't escape it and they have to just be okay with it.

I have considered tattooing less, but I could never imaging not tattooing at all. I mean what I do other things sure, I want to keep life interesting but I'm always going to be a tattoo.

Question:- Where you hate to tattoo?

Kim Saigh:- I don't really like tattooing stomachs that's least favorite part because it's just even if someone's like really being or thin it's just there's nothing, no bone underneath it to support it so that's always my least favorite happy to do is in stomach.

Kim Saigh:- For someone who's getting their first tattoo, I would say most definitely you know just think about it and pick something that's timeless that they're gonna love like you know nothing that's trendy and just really try and go towards like what's in your heart. Not the name of your first boyfriend or girlfriend or your last or the one in the middle of that.

Question:- Why tattoos are addictive?

Kim Saigh:- I think there's so much mystery behind getting a tattoo like the first one there's so much build-up, but then I think after that you're just like oh that was easy I could do it again, you start the wheels start turning and you just can keep going with it.

Kim Saigh:- I have multiple favorites for different reasons, you actually el oceano did this one (showing her flower tattoo on back) and it's just that the colors so bright and it's just so it has so much dimension and depth and so I just wanted to do more work I really loved her word and it's my favorite right now.

Question:- If I could tattoo one person.

Kim Saigh:- If there was one person I could tattoo, I was gonna say my parents, but that's too and I would be scared to do that. But I think probably my parents, yeah I don't know does that count, I think would be kind of cool to have that bond.

Question:- Naughtiest place you ever tattooed?

Kim Saigh:- I don't really tattoo naughty places. I send those people that other people, but I don't like.

"Kim Saigh" is at the 3rd Position in this list.

List of Best Tattoo Artist in the World | Popular Rank 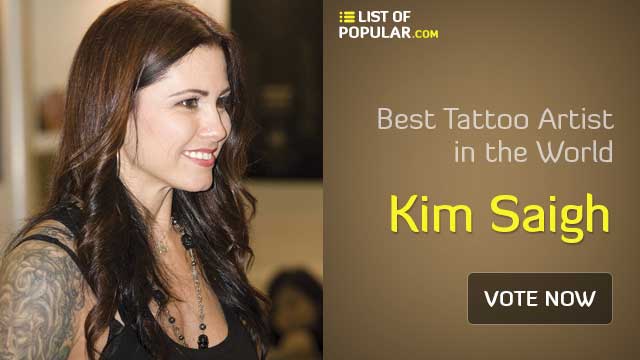 Total Votes: 29
Votes received:7
Up votes:4
Down votes:3
21.05% Popularity
57% Up votes
43% Down votes
Go to voting page
Comments on Kim Saigh
Submit
Cancel
1 Comments
KIM SAIGH, IS A WONDERFUL TATTOO ARTIST, AND A VER NICE PERSON, DOWN DEEP, I KNOW I LOVE HER.
0
0
Reply