FacebookTwitterWhatsAppEmail
Naushad Ali (1919-2006) was a famous musician of Hindi films. Even after 64 years of playing music in the film, Naushad gave music only in 67 films, but his skill won the point that the quality is far ahead of the number.

Naushad was born in the house of Munshi Wahid Ali on December 25, 1919 in Lucknow. At the age of 17 he had traveled to Mumbai to try his luck. In the initial struggles, he got the help of quality masters like Ustad Mushtaq Hussain Khan, Ustad Jhande Khan and Pandit Khem Chandra Prakash.

For the first time, he got the opportunity to freely play music in 'Prem Nagar' in 1940, but his film 'Ratan', which became his own identity in 1944, with songs written by Zohra Bai Ambale, Amir Bai Karnatki, Karan Diwan and Shyam It has become very popular and from here it is a journey of success that comes to the share of fewer people.

He also gave music for the television, in the serial like 'The Sword of Tipu Sultan' and 'Akbar the Great'. Nonetheless, Naushad Sahib was extremely sorry to be the super flop of his last film. The film was the Akbar Khan's Taj Mahal, which was built at a cost of 100 crores, which fell down when it was released. When Mughle Azam was re-released in colors, he was very happy.

"Naushad Ali" is at the 8th Position in this list. 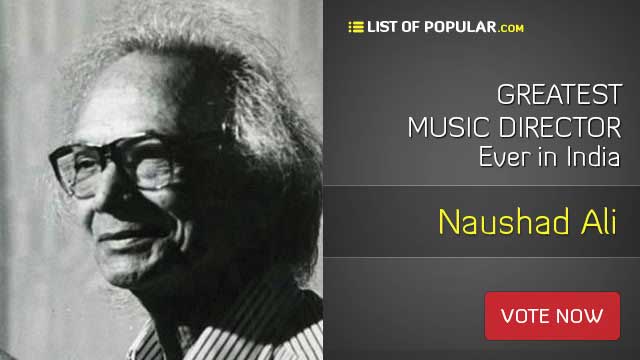