FacebookTwitterWhatsAppEmail
Kalyanji Anandji is a musical duet from India, the name of the duo belongs to an Indian composer, one of the most recognized for his work in soundtracks of in Hindi films, particularly in genres of action in the decade of the 1970s. The name comes from the stack of the Gujarati brothers, who decided to form a duo, such as Kalyanji Virji Shah and Anandji Virji Shah. Some of his best known works are Don, Bairaag, Saraswatichandra, Qurbani, Tridev and Safar. They won the "Filmfare" Award in 1975, as the Best Musical Directors for their performance in the film Kora Kagaz.

"Kalyanji Anandji" is at the 8th Position in this list. 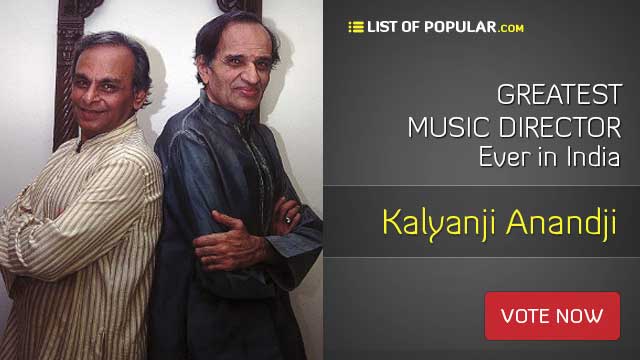