FacebookTwitterWhatsAppEmail
Ankit Tiwari (whose real name is Ankur Tewari, born on 6 of March of 1990, Kanpur) is a composer, playback singer and musical director. He received praise for his song entitled, Sunn Raha Hai for the movie Aashiqui 2.

He comes from Kanpur, India. His father has a recording studio and his mother is also a singer, who plays devotional music. As a child he sat with them during practice and trained under the tutelage of Vinod Kumar Dwivedi. He used to practice for almost 12 hours a day. He studied at the Jugal Devi Saraswati Vidya Mandir, in Kanpur.

He has composed musical themes for films such as Aashiqui 2, Do Dooni Chaar, Saheb Biwi Aur Gangster and Ek Villain.

Tiwari worked with television channels, including Sony TV, Star Plus and Colors, producing qualifying funds in some of her telenovelas. He also interpreted musical themes for some of his productions. In 2011, he composed a musical theme for a devotional album titled "Saregama Sai Ki Tasveer", produced by Richa Sharma.

His song, "Sunn Raha Hai" and another song "Galliyan", managed to get acclaim from around the world, becoming an anthem dedicated to love.

"Ankit Tiwari" is at the 13th Position in this list. 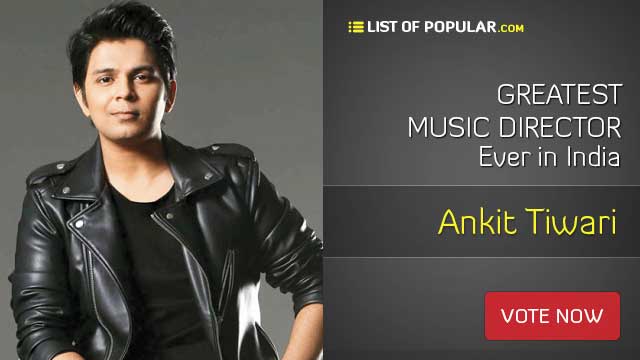