FacebookTwitterWhatsAppEmail
This Means War is a US action romantic comedy by director McG from the year 2012. It's about two secret agents, Chris Pine and Tom Hardy, falling in love with the same woman played by Reese Witherspoon.

Lauren meets both men several times independently of each other, with their competitors abusing technology and intelligence personnel to gain an advantage. Lauren gets more and more pressure. However, when Karl Heinrich enters the US to take revenge on FDR and Tuck, who are responsible for the death of his brother, the two must confess to Lauren that they have known each other for a very long time. When they want to leave a restaurant, Karl Heinrich and his men suddenly appear and a chase begins, at the end of which Karl Heinrich is killed. In the process, Lauren is put into a life-threatening situation in which she has to decide for her true love, and her choice falls on FDR.

The film was originally scheduled for release on February 14, 2012 in Valentine's Day, in the United States. However, the production company 20th Century Fox postponed the official launch date to 17 February 2012, as this should avoid competition with the romance drama Love Forever (The Vow). Instead, the film was on February 14, 2012 listed in about 2000 cinemas as a surprise premiere. In Germany the film was released on March 1, 2012 in theaters.

"Trying to please all viewers, the film is stumbling heavily. The cartoonish, in some details but inappropriately hard action scenes, barely fit into the story and seem like a mere concession to the male audience. Original gags are in short supply. For the finale, the sloppy script makes it very easy and loses credibility to the rest." -

"Two superspyes are beating around a woman and the audience enjoys it. Simple as This Means War to describe and that works because director McG and his author duo never try to make it a lot more. Skilfully combining the genres of action and romantic comedy into an extremely entertaining film" -

"This Means War" is at the 45th Position in this list. 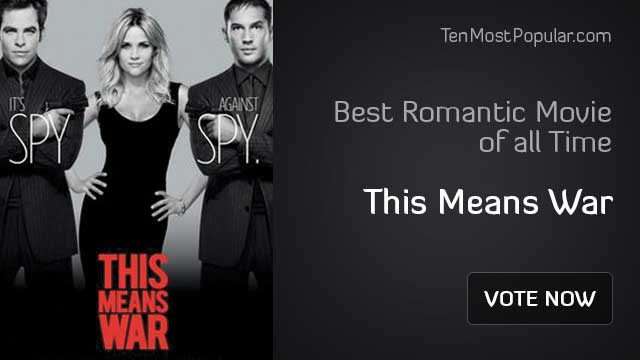