Eternal Sunshine of the Spotless Mind

FacebookTwitterWhatsAppEmail
"Eternal Sunshine of the Spotless Mind", a romantic drama with elements of fiction, filmed by Michel Gondry from a screenplay Charlie Kaufman in 2004. The film won an Oscar for best original script. One of the few films where Jim Carrey is not in a comedy role. The film takes the 85th place in the list of the 250 best films according to IMDb.

Tagline: "You can erase love from memory. Throwing out of the heart is another story."

On Valentine's Day, Joel Berish (Jim Carrey), as usual, got ready to go to work, but at the last minute, standing at Long Island Station, he decided that he needed to change the route, and got on the train from Montok to Rockville Center. In the train, he meets a blue-haired girl, Clementine Kruchinski (Kate Winslet). Communicating, they understand that they have a lot of common facts from the biography. For example, Joel often goes to the bookstore where Clementine works as a cashier. Further, the action is transferred to the recent past.

Joel, a dreamy melancholic, meets a cheerful and beautiful Clementine. Their life is a firework of bright events, but gradually the relationship begins to deteriorate and after a major scandal, Clementine leaves Joel. After some time, Joel comes to her store to apologize, but to his surprise, Clementine does not recognize him, but talks sweetly with a certain Patrick, turning to Joel as a stranger. This fact is very surprising to Joel, until their friends and Clementine friends show him a notice card from a certain Lacuna company, on which it is written that Clement "erased" Joel from her memory and they are asked not to mention his name in her presence. Joel finds out that Lacuna really provides services to erase some of the memories, and that Clementine really erased all his memory of him, unable to bear the gap. On the morning of February 12, Joel arrives at Lacuna to respond to Clementine in the same way and erase all the memories of her. Doctor Howard Merziyak (Tom Wilkinson) makes a map of Joel's memories, for which he brings absolutely all the objects from his environment, which would somehow remind him of Clementine. Making a map of the memories, Joel is allowed to go home to wait for the arrival of technicians, Stan (Mark Ruffalo) and Patrick (Elijah Wood), who will have to carry out the procedure for erasing the memories at home. Following the instructions, Joel drinks a special medicine that puts him to sleep, so that he does not remember the technicians-erasers.

In his subconscious, Joel actively resists erasing memories that, like in the movies, scroll one after another in his head, causing nostalgia and sadness. Joel is experiencing one after another romantic dates with Clementina, who in his subconscious mind actively helps him to deal with erasure, she pursues him in memories and even moves on some tricks. And while the process of erasing memories is going on, it becomes clear from the dialogue between Patrick and Stan that Patrick, with whom Clementine talked in the store, when Joel came there, is one of the technicians, when he performed the same procedure for deleting over Clementine, he "fell in love" with her. Later they are joined by Mary (Kirsten Dunst), Dr. Merziyaka's secretary. Suddenly, Clementine is agitated calling Patrick and asks for an urgent visit to her. He breaks off and leaves Stan with Mary in Joel's apartment. Arriving to Clementine, Patrick learns that he had blundered, having begun an affair with Clementina, he did not find anything better than how to use the things Joel brought to Lacuna that he associated with Clementina. However, Clementine's map of the same memories of Joel was compiled in other subjects, which is why the girl begins to frighten her sense of deja vu and she is on the verge of breaking up with Patrick.

Mary and Stan retire and don't notice that the process of erasing the memories didn't go according to plan, Joel manages to transfer Clementine to his childhood memories, from which it cannot be erased, because these memories are not included in the map. As soon as Stan discovers the problem, he immediately calls Dr. Merviyak. He arrives, and finally the problem is eliminated, all traces of memories of Clementine are erased from Joel's brain. Stan leaves the room, leaving Mary and Dr. Merziyak alone. Mary confesses her love to the doctor, but he asks her not to voice any more confessions, but she kisses him on the lips, and the doctor's wife, who saw it all through the window, accidentally becomes a witness to the kiss. Mary apologizes to the doctor's wife, but she arrives unexpectedly and asks Merziyaka to confess everything. It turns out that Mary is not the first to try to get close to the doctor and she has also been erasing memories of her feelings for him. Mary understands that even Lacuna technology cannot erase such a thing as love.

Valentine's Day. Clementine, intending to go to Joel, went to her house for a toothbrush and found her envelope from Mary, which contained an audio tape recording of her voice and all the details about the case of erasing the memories associated with her. Joel hears her confession, it was made in rather harsh colors, asks Clementine to leave him and leaves, frustrated with Clementina's angry words addressed to her, believing that all this is some kind of absurd and rude joke. Clementine listens to the tape at home and finds that they had an affair. Clementine eventually decides to apologize to him, enters his apartment at the moment when he listens to the exact same tape with his confession. After listening to the film with the recognition of Joel, in which he revealed all her vices and negative aspects, she realizes that the end of their novel was rather sad, once Joel allowed himself to speak out in this way. Faced with the fact that they were madly in love, and then could not tolerate each other, Clementine and Joel decide to start everything from the beginning.

"Eternal Sunshine of the Spotless Mind" is at the 4th Position in this list. 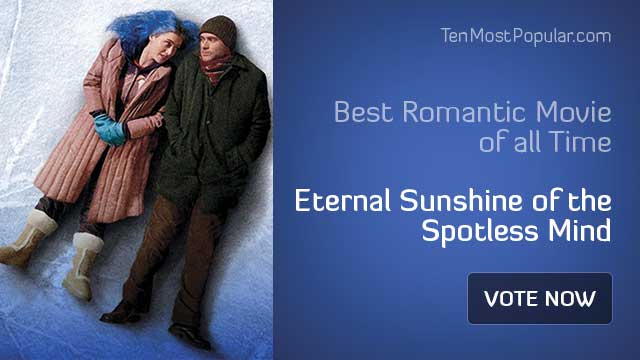