The Autopsy of Jane Doe

FacebookTwitterWhatsAppEmail
The Autopsy of Jane Doe is an American horror film by Norwegian director André Øvredal from 2016. The film premiered on September 9, 2016 at the Toronto International Film Festival and was released on December 21, 2016 in US cinemas. The German-language premiere took place on September 7, 2017 at the Fantasy Filmfest. In Germany appeared The Autopsy of Jane Doe on October 20, 2017 Blu-ray Disc and DVD.

The first examinations of the corpse give a puzzling picture. In addition to the absence of dead spots and the lack of rigor mortis, the murdered's wrists and feet are broken with no signs of hematoma and the tongue is cut off. After opening the chest, Tommy and Austin see that the organs resemble those of burn victims and have these puncture wounds, although the body is externally intact. During the investigation, the first strange phenomena occur. So the blood and organ samples in the refrigerator run out, and the cat Tildens comes through the vent severely injured and bleeding, after which Tommy burns them in the crematorium.

Finally, the two continue the autopsy and find in the stomach a flower of common thorn apple and a shroud with Roman numerals, characters and symbols. When Tommy finally removes the skin from the chest, he discovers the same signs and symbols on the inside of the skin. Tommy and Austin finally come to the conclusion that the dead must come from the north and was offered in a ritual murder as a human sacrifice.

When the lights suddenly go out and the other bodies have disappeared from the cold rooms, Tommy and Austin decide to leave the morgue by the elevator. However, since the elevator does not work and they are followed by the living dead, they hide in one of the offices and try in vain to reach the sheriff over the phone. After the pursuers let go of them, they decide to burn the unknown body, which seems responsible for the events, in the crematorium. Back in the morgue, a supernatural force locks the door to the crematorium, prompting Austin to try the corpse with acetone in vainto burn. Meanwhile, the elevator works again and they try to go up. However, the elevator door does not close and as a living dead approaches, Tommy takes an emergency ax and knocks it down. As it turns out, however, the dejected dead is Austin's friend Emma, who came back to check on him.

Austin and Tommy decide to go back to the morgue to find out what the unknown dead man is up to and to find a way to kill them. After opening the skull, they see that the brain cells have not died yet and probably an unknown energy keeps the dead alive. On the found in the stomach grave cloth Austin discovered the scripture Leviticus 20:27 and the Roman numeral 1693. They eventually come to the theory that the dead woman a witch must be that similar to the witch trials of Salem to have died from 1692. However, the injuries do not suit those of the witch hunt that is why this ritual apparently created a witch and she is now out for revenge.

As a result, Tommy offers as a sacrifice to the witch and asks her to spare his son. Tommy then suffers the same injuries to the witch. Eventually, Austin has to kill his father to release him from his agony. Then the light goes back on and Austin hears the sheriff calling for him. But the door is blocked and Austin realizes that the calls are a hallucination. When he turns around his father suddenly stands in front of him and Austin falls in shock over the banister in the death.

The next morning, the police arrive and find the bodies of Tommy, Austin and Emma. The unknown body is still lying on the table with no signs of autopsy and the other bodies are still there. The sheriff orders the stranger to be transferred to another county to carry out the autopsy there.

"The Autopsy of Jane Doe" is at the 26th Position in this list. 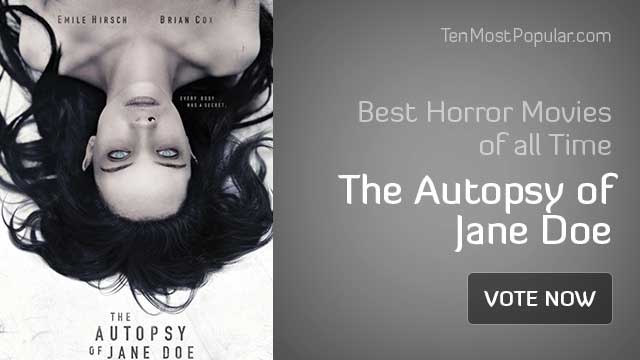 Total Votes: 42
Votes received:1
Up votes:1
Down votes:0
2.38% Popularity
100% Up votes
0% Down votes
Go to voting page
Comments on The Autopsy of Jane Doe
Submit
Cancel