Manos: The Hands of Fate

FacebookTwitterWhatsAppEmail
Manos: The Hands of Fate is an American horror movie from the year 1966. In the Internet Movie Database, the film in the list of the 100 worst rated films out (as of April 2015) and has repeatedly been referred to as one of the worst or even the worst movie of all time. In 1993, the film by the American series Mystery Science Theater 3000 re-edited.

On the way to vacation, Michael, his wife Margaret and their daughter Debbie pass by a secluded house. There they are received by Torgo, a satyr who seems little pleased with the presence of strangers. Nevertheless, the family stays overnight. When a loud howl sounds, her dog runs away and is found dead a short time later. Margaret wants to leave, but the car does not start. While Michael tries to get him to work, Margaret is molested by Torgo. Debbie runs away and is found a short time later by her parents with a big dog. She leads Michael and Margaret to a ritual place where "the master" of Torgo sleeps on an altar and a group of women stands on pillars, seemingly unconscious. The family goes back to the house. Torgo demands a wife for herself at the ritual place of the sleeping master. While Margaret and Debbie are left behind in the house, Michael is beaten unconscious by Torgo. The master and his wives awaken and it is discussed what to do with the visitors. While Master Torgo is called to account for his desires, a fight ensues between the women. Master ends this, has a resisting woman tied to a pillar, and performs a sacrificial ritual with Torgo's hand, which escapes into the night. Meanwhile, Michael has awakened and runs with Margaret and Debbie in the wilderness. The master and his women begin the search for the visitors. They return to the house, suspecting that the inhabitants are gone. There, however, they encounter the master approaching them, apparently unimpressed by Michael's pistol shots. On another day, two young women pass the house and are now greeted by Michael, who took the role of Torgo as a servant. Margaret and Debbie now belong to the followers of the master.

"If the movie did not have unbearable lengths, then you could certainly recommend it to real trash fans. The endless scenes, in which almost nothing happens, make him so boring that even hard-boiled friends of bad movies are likely to find it hard to enjoy this unprofessionality."

"Anyone who has seen Manos and then, in all seriousness and in full possession of his mental capacity (which, however, may not be particularly tall, hehe) claims that Plan 9 or any other Eddie Wood product would be worse, do me Sorry, there is no help for that. Manos is actually the most unbearable, by far the most unbearable, artisanly lousy, most intellectually insulting and devastatingly played 'film' that I've ever had the pleasure to watch."

In the television series How I Met Your Mother and Elementary will Manos: The Hands of Fate called a bad tester film of all time.

"Manos: The Hands of Fate" is at the 16th Position in this list. 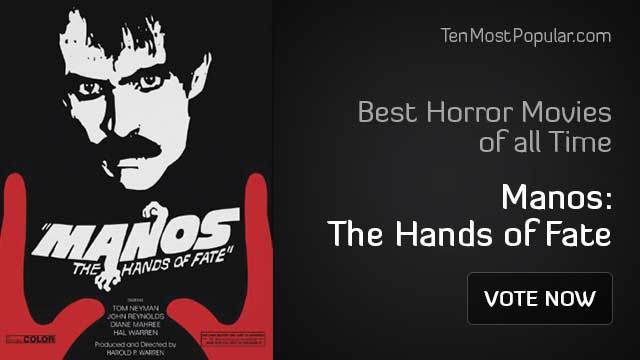 Total Votes: 42
Votes received:1
Up votes:1
Down votes:0
2.38% Popularity
100% Up votes
0% Down votes
Go to voting page
Comments on Manos: The Hands of Fate
Submit
Cancel