FacebookTwitterWhatsAppEmail
The Kingdom of Norway or Norge Kongeriket (Noreg) in Norwegian, is a Nordic country on the western end of the Scandinavian Peninsula bordering Sweden, Finland and Russia. The beaches in the North Atlantic Ocean and Barents Sea are the locations of famous fords. Svalbard and Jan Mayen are under Norwegian sovereignty based on the Svalbard Treaty. Norway has an island called Bouvet which is located on the Atlantic Ocean. The total area of Norway is 385.525 km² and a population of 5.3 million (2018 estimate). Norway is the second lowest population density in Europe. Norway has extensive petroleum reserves, natural gas, minerals, seafood, fresh water. Norway is also the largest per capita producer of oil and natural gas outside the Middle East.

Harald Fairhair ruled with strong hands, and according to history, many Norwegians left the country to live in Iceland, the Faroe Islands, Green Land, and parts of Great Britain and Ireland. Today's Irish cities such as Dublin, Limerick and Waterford were established by Norwegian and Danish settlers.

The Norwegian landscape is generally rough and mountainous, mostly covered by glaciers, and has a coastline of more than 83,000 km which is limited by fords. The northern part of the country is also known as the Midnight Sun Land because it is located at the northernmost tip of the earth, where every summer, the sun never sinks and in the winter, the sun never appears at all.

"Norway - Kingdom of Norway" is at the 1st Position in this list. 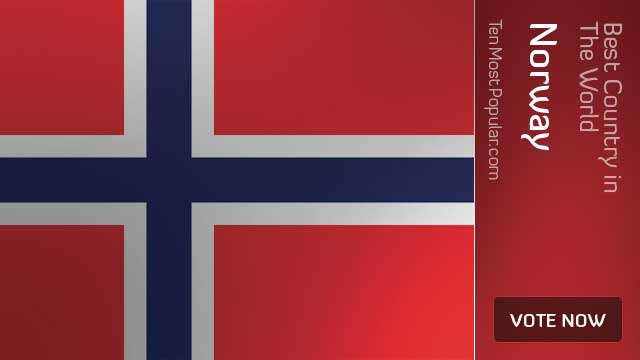