Kebab (In Persian: Kabab) is a wide variety of meals on skewers originating in the Middle East and which were subsequently adopted in the Balkans, the Caucasus and other parts of Europe, as well as in areas of southern and central Asia. In general, the term kebab without any other qualifier is used to refer to shish kebab (in Turkish, "şiş kebap"), which is cooked on a skewer. However, in the Middle East the name refers to meat that is roasted or cooked in rolls of pressed meat in a vertical stove and can be served on plates, in dürüm or lahmacun.

In its French-speaking usage, as in other Western languages, the term used alone refers specifically to the grilled meat sandwich grilled on the spit or doner kebab popularized in Berlin, Germany, in the 1970s. By metonymy, "kebab" designates also the type of restaurant (in) that serves it. Among the most common equivalents of the term doner kebab, the term chawarma (and its variants) is used in the Middle East. These terms refer to either the meat and its method of preparation or the corresponding sandwich.

The traditional meat of kebab is lamb, but depending on local tastes and religious prohibitions, it is currently prepared with beef, lamb, goat, chicken, pork or fish. It is usually fatty tissue in most and although the word often sounds identical or seems to be, do not confuse the skewer called kebab with the species of meatball called keppe, since the keppe is usually based on raw minced or ground meats, although very marinated or macerated. The original kebab is usually seasoned with a mixture of numerous spices (ras el hanout), which include cumin, oregano, coriander, turmeric, caraway, paprika, nutmeg, cayenne and cinnamon. All this mixture of ingredients is crushed and added in different proportions, depending on the officiant.

The tradition of kebab existed since the Middle Ages in Anatolia, introduced by Turkish migration in this region in the eleventh century.

According to food geographer Pierre Raffard, "kebab is a tradition of the nomadic Turkish peoples of Central Asia". However, it is necessary to wait until the beginning of the 19 century for the kebab to appear in the form of a sandwich in the Ottoman cities, notably through stalls or street vendors.

Legend has it that soldiers of the Ottoman Empire in the Middle Ages used their swords to roast the meat.

The kebab was once roasted horizontally before the vertical posture was invented in 1867 by a certain Iskender Efendi, whose restaurant Iskender Kebab still exists and is located in the vicinity of the city of Bursa.

The kebab, which was already served in bread, was popularized in Istanbul in 1945 by Beyti Güler, he founded restaurant Beyti, in the district Bakırköy. However, it will be necessary to wait until the beginning of the 1970s to see the sandwich introduced in Germany (in Berlin) mainly to men like Mehmet Aygün and Kadir Nurman, served with sauces and accompanied by a drink.

Shish kebab (şiş kebap in Turkish) consists of a metal or wood stick with small blocks of various types of meat or fish (especially swordfish) with or without vegetables, which is roasted on a grill. They are made from beef, sheep, lamb or chicken. They are prepared both in metal ferritos and in wooden sticks. In this latest version, in Turkish called Çöp şiş, the pieces of meat are smaller. The vegetables commonly used are eggplants, tomatoes, chillies, carrots and lately also mushrooms. This dish is eaten accompanied by Turkish flat bread "ask".

In Turkey there are several more dishes that bear the common denomination of kebap, such as Adana kebap or İskender Kebap.

In Iran there are many types of kebabs, such as koobideh, barg, soltany, boryani, senjeh and shish kebab. They can be made of lamb, chicken or veal. One of the latest trends is also cooking it with fish or turkey, which excludes the barg type. The most common way to serve these kebabs in Iran is the cello kabab (rice and kebab), which includes either the koobideh or the barg variety, accompanied by grilled tomatoes and rice (sometimes, with a mild saffron flavor).

This is what the Burgundian traveler Bertrandon de la Broquière reported during his trip in 1431:

Prussian Marshal Helmuth von Moltke (who was then appointed instructor of Ottoman troops at the invitation of Ottoman Minister of War Hüsrev M. Pasha) wrote in his diary on 16 June 1836:

"Our Turkish midday meal was taken at Kebabcı (kebabier). [...] Then we were served on a wooden plate of small pieces of mutton fried on a spit and wrapped in bread dough, it was a very good tasty dish."

In Europe, the kebab is usually a sandwich or slice of grilled meat on a spit and cut into thin slices, served in bread with raw vegetables, possibly fries and a sauce.

The meat is cut into slices a few millimeters thick and is stacked on a vertical pin. An electric resistance system or gas burners located behind the meat tower allows it to be cooked. Once cooked, the meat is cut vertically into thin slices.

Various types of meat can be used according to the customs of each country: sheep, beef, veal, turkey, chicken, pork.

The döner kebab is served in a Turkish round loaf, a whole loaf or a half bread in the case of the "classic" kebab, but is often also in a dürüm or pita, or even in a baguette. It is particularly garnished with green salad, tomatoes and onion, although other crudités can be added. Several sauces can accompany it. One of the most common is the white sauce or some kind of sesame sauce (tahina) more or less spicy. There is also the samurai sauce, the cocktail sauce, the mayonnaise, the harissa, the tzatziki, theketchup, mustard, barbecue sauce or Andalusian sauce. Each sauce can be raised by adding pulbiber, red pepper flakes.

In Europe, scientific research suspects a possible link between phosphorus contained in kebabs and cardiovascular diseases. MEPs from the Health Committee want to ban the use of phosphates in kebab meat, used as food additives, for the preservation of meat. BFMTV recalls that a US study published in 2013, raises the link between diets rich in phosphorus and increased mortality in the United States. Some political parties like the Socialist Party or the European Green Party, judging the phosphorus healthy for health, "have already announced their veto" if an application for a prohibition was submitted to the European Parliament.

Depending on the geographical location and the history of their installation, the words designating the same type of sandwich vary.

In the Paris region, the kebab is often called colloquially "Greek sandwich" or even "Greek". This misnomer - and virtually unknown in other regions of France - originated in the appearance, in the 1980s, Greek sellers of gyros (Greek specialty very close to the kebab but based on pita bread), in the 5 district of Paris (Latin Quarter, rue de la Huchette, Rue Mouffetard), who were the first to market this type of sandwich for the student and tourist population specific to this district.

Subsequently, when the German-Turkish kebabs proper appeared in the Paris region in the 1990s, mostly held by Maghrebians, the term "Greek" remained in common language, including among the restorers themselves, who do not hesitate to mention "Greek" on their menus.

The Arabic word for this preparation is chaouarma شاورما from the Turkish firm, "revolving movement". It is not uncommon to find also shawarma, shwarma, shawerma or shoarma (not to be confused with shorma, qorma and korma, Pakistani recipes for poultry). Kebab shops of Turkish and Syrian origins in Belgium and eastern France use both leavened bread and unleavened bread named dürüm. Unlike the "pitta kebab" or "pita kebab", the dürüm kebab sandwich is wrapped in unleavened bread.

In Mexico, this method of cooking is called al pastor, literally "shepherd", that is to say "pastoral", and comes from Mexicans of Lebanese origin. The cooking is adapted to the local meat that is to say to the pork.

Restaurants offering takeaway kebabs have become common in many European regions. They mainly spread from the 1990s, first in large cities with a strong immigrant component and then gradually elsewhere. In France, Switzerland, the United Kingdom, Belgium and the Netherlands, a large proportion of fast food restaurants are now kebabs. Since the late 2000s, there was a sharp increase in this type of restoration in Asia, including Japan.

They are part of the street food and night culture it is common in young to eat a kebab during a night on the town for reasons of cost and late opening.

In France, the kebab was also a part of the suburban culture in the 1990s and 2000s. This cheap and prepared halal meat sandwich was indeed popular with young people from low-income neighborhoods, often foreign origin (in particular Maghreb, Turkish and sub-Saharan) and of Muslim confession. So, many French rappers have referred to the sandwich (often using the term "Greek") in their pieces, like Booba ("I represent the suburbs as a Greek-fries", The Duke of Boulogne, 2006 and Salad tomatoes onions), La Fouine ("We stayed in the square to share a twenty-one Greek-fries", My landmarks, 2009), Mafia K'1 Fry ("For those who have not dropped the break or the Greek", For those, 2003), Sinik ("Fashion at the time was Greek and fragrant rice", Rue des Bergeres, 2007) or Rohff ("Raise your YZ and Greek tone, nigga", 94 Mental, 2007). Trade kebab is thus a political issue, the extreme right recital as a symbol of the presence of Muslims in France.

From 2010, the sandwich is widely available to all social classes and becomes one of the sandwiches most consumed by the French, especially among young people and students. A number of restaurants kebabs "high end" are emerging (process gentrification), offering significantly more expensive sandwiches kebabs "classic" and prepared with quality ingredients, sometimes from of organic farming. These kebabs, often located in the trendy districts of the big cities, are destined for a rather urban clientele, relatively well-off and bourgeois-bohemian. In the suburbs and among adolescents, kebab becomes less popular and finds strong competition from the French tacos.

The kebab stores in Germany exceed in 2007 McDonald's and Burger King taken separately. According to some studies, four times more kebabs are consumed in Germany than in hamburgers. In France, kebabs make up 14% of the sandwiches sold, ie half of the sandwiches except "sandwich baguette", or, according to sources, 280 or 300 million sandwiches sold each year. France has more than ten thousand kebabs outlets. The kebab has also grown to United States, where it is considered a German specialty.

These restaurants are a successful form of ethnic entrepreneurship. Among Arabs and Turkey located in Europe, the entrepreneurship has grown notably in response to the dramatic fall in the 1980s manufacturing jobs for which they had previously migrated.

The French far-right manifesto since 2013 his hostility to kebab restaurants, which it perceives the diffusion as a manifestation of the "Islamization" of France and the theory of the great replacement.

The chronicler of France Culture Guillaume Erner actually one of the symbols or the symbol of Europe.

More and more the kebab is trying to win its acclaim and great chefs try to offer a "quality" version with well-chosen or organic products (homemade bread, butcher's meat, homemade sauce, etc.). As already seen in New York, some observers are predicting that the kebab will become more and more a product that goes upmarket like the hamburger there a few years ago.

Other varieties of kebabs

There are several kinds of kebab.

In 2007, a study by the Directorate-General for Competition, Consumer Affairs and Fraud Control (DGCCRF) in France uncovered numerous cases of negligence on hygiene in fast food restaurants, considered "no compliant", especially in 61.5% of oriental restaurants that sell kebabs. Note that the same study, which looked at 1,133 sales points of sandwiches, also found non-compliant 34.5% of the traditional sandwich and 46.9% bakeries.

"Tikka Kabab" is at the 28th Position in this list. 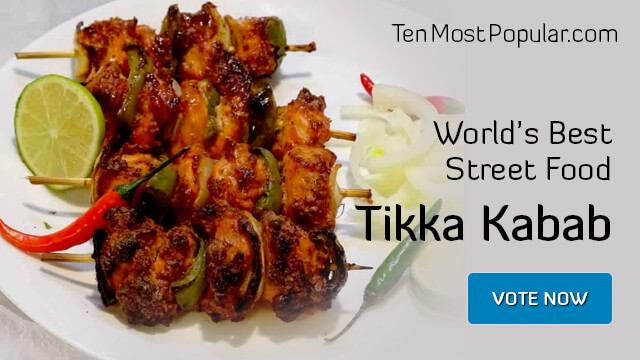