A kaassoufflé (German: Käsesoufflé) is a Dutch snack. It is a deep-fried piece of dough filled with melted cheese. Breadcrumbs are used as a breadcrumb.

A cheese soufflé is originally a cheese dish, in which the soufflé is made from butter, egg yolk and grated cheese, with beaten proteins as the last addition. The cheese soufflé produced in soufflé pots in the oven is made from special cheeses (France, Belgium, and Italy) and various other ingredients per region. The beaten egg white makes this soufflé light.

Kaassoufflés in most Dutch supermarkets and takeaways available. They are seen as a vegetarian alternative for meat croquettes and frikandelles and can be eaten with peanut sauce or mustard.

The Dutch snack called cheese soufflé has nothing to do with the original cheese soufflé. This consists of a puff pastry envelope rolled in breadcrumbs and a cheese filling. The filling consists of a mixture of processed cheese, butter, starch, water and baking stabilizer. The cheese used in the processed cheese comes from cheeses that are not suitable for sale, such as trimmings, cracked cheeses, cheeses in which gas has taken place. The cheese can be, for example, Beemster cheese, Cheddar, Mozzarella, Gouda cheese or a mixture of these, depending on what the supplier wants in the product. However, due to the addition of melting salts, the specific taste of the cheese used is lost.

The filling of the soufflé therefore consists of melted cheese and cheese substitute (as 'filling'). When 39% processed cheese is used, for example, 61% of the filling consists of analogue cheese. The final amount of real cheese in the cheese soufflé is 6-9%.

The cheese souffle is baked in the fryer or in the oven, with the filling also becoming very hot. For most vegetarians, a cheese souffle is an alternative to a croquette or a frikandel and can be combined with various sauces.

The cheese souffle is served both separately and in a sandwich.

They are longer and darker. The color goes towards orange. One bottom is fairly flat, the other is a bit more rounded. They weigh 70 grams each.

The package states that it must be baked for 8 minutes at 200 degrees Celsius. We do that! First preheat, then the snack in the basket and wait for 8 minutes until it is ready. What is striking is that if you prepare the snack in the oven, you will be ready in 6-9 minutes, but then the soufflé must rest for 2 minutes. Apparently that is not necessary from the Airfryer. You may think: isn't the oven faster? If you look at preparation time, it doesn't make much difference. It only takes me 20 minutes for the oven to reach 240 degrees, and the Airfryer is up to temperature within a few minutes.

How does it taste?

I let the cash register cool off before I bite into it. The crust is crispy, that must be said. A bit thicker than with frying variants, but that is more often with oven snacks. Because the oven snack is thinner than the 'normal' version, it is easier to eat because the cheese drips less quickly from the crust. By the way, it stays crispy until the last bite. The taste of the filling is OK, for me it could have been spicier - but that is personal.

With regard to calories: in a non-prepared normal cheese souffle there are 179 kcal (60 grams). This 70 gram counts 254 - but there is nothing further to frying fat. Even if they had the same weight, these oven soufflés contained more calories. But you also have to add the absorbed fat to a fried variant.

A look at the factory

Snack manufacturer Royaan, who is responsible for half of the market, has Keuringsdienst van Waarde take a look at the factory. Royaan shows that fillings consist of a cheese batter consisting of butter, starch, melting salt and 'cheese'. It differs per brand what kind of cheese this is, but usually this is Beemster or Gouda. What all brands agree is that cheese is not used in its natural form, but melted cheese.

What is processed cheese?

Fallen, rejected and defective cheese are the less tasty synonyms used to describe this concept. These names are certainly not unjustified because melted cheese is made from cheeses that are no longer 'suitable' for sale in the store. Think of cheeses that are torn, cut, and sometimes even slightly moldy. Breeding companies first remove the really bad pieces before the cheese is processed for, for example, the cheese soufflés. Although this process does not make your mouth water, relatively good products are recycled. It is therefore extremely sustainable!

This is how the filling is made from your cheese souffle

First the fallen cheese is cut. It is then melted with the aid of steam and melting salts. The disadvantage of this is that the cheeses lose a lot of their taste. This also means that the filling consists largely of a 'cheese substitute': a product that tastes like cheese but is not.

The smooth filling of a cheese souffle therefore consists of a mixture of a small portion of 'real' cheese (around 6-9%), but especially fake cheese, butter, starch and melting salt.

Your cheese souffle therefore has very little to do with traditional cheese. But do not let this eat the cheese from your bread, and add one if you feel like it.

"Kaassoufflé" is at the 15th Position in this list. 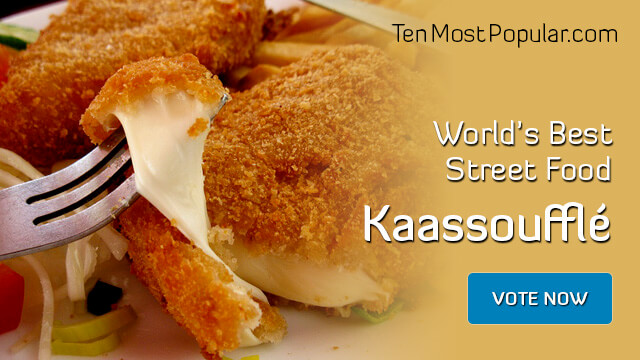