FacebookTwitterWhatsAppEmail
Hamburger (or often called burger) is a type of food in the form of a round-shaped bread sliced ​​in two and in the middle filled with patty which is usually taken from meat, then vegetables in the form of lettuce, tomatoes and onions. As a sauce, burgers are given various types of sauces such as mayonnaise, tomato sauce and chili and mustard. Some burger variants are also equipped with cheese, pickled and other complementary materials such as sausages and ham.

Many people mistakenly think that the name Hamburger comes from the word "Ham", but actually the name comes from the city of Hamburg in Germany, where this food originated. From the second largest city in Germany, many of its residents emigrated to America and spread the making of burgers there. Just a coincidence that the word "ham" which in English means salami has a sound similar to Hamburger, hamburger fact not contain Ham (although there are also restaurants that add sliced Ham on their burgers for more flavor).

So it can literally be concluded that the meaning of the word Hamburger means "food originating from Hamburg" and does not mean "food containing Ham". But in practice burgers or hamburgers are more often interpreted as sandwiches or other types of round bread. In society the word burger is more attached to the type of food than the origin and creator of the burger.

There are several versions of the history of the creation of burgers, this snack was originally a typical food of the Tartars, which is in the form of minced meat which is eaten raw with orange juice. Nations Tartars are nomads who travel frequently away on horseback, so that the meat that they bring often become hard and unfit for consumption, then they outsmart by putting horse meat under their saddles. after a long trip it turns out that the meat is still warm and not cold, then the meat is immediately eaten without being cooked and only given a little lime juice.

Dishes are famous delicacies from Central Asia, are then carried by European sailors to the country, specifically to the city of Hamburg because people there generally assume that they are a civilized nation, they refused to eat meat that is not cooked, the typical meat Tartar that they cook first before being eaten by burning or frying, it turns out this dish is very popular with various people. Until now some people still preferred to eat it raw. This is the origin of burger meat.

"Hamburger" is at the 12th Position in this list. 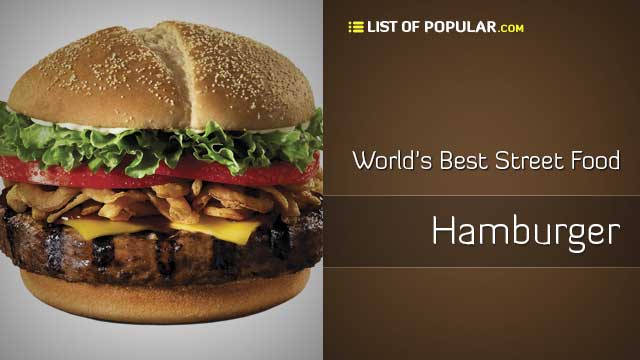