FacebookTwitterWhatsAppEmail
Fries are dishes made from pieces of potato fried in hot cooking oil. In the menu of restaurants, french fries are long-cut and fried in a submerged state in hot cooking oil called French fries. Fries can be eaten just like a snack, or as a complementary food for main dishes such as steaks, hamburgers, fish and chips and currywurst. In the United Kingdom and Commonwealth Countries, French fries are called chips. In North America, the term "chips" means potato crisps (potato chips), while in Australia, New Zealand and South Africa, "chips" can mean French fries or potato chips.

Fries are popular throughout the world thanks to ready-to-eat restaurants such as McDonald's and Burger King. In the early 1950s, the Jack Simplot, which had a company called JR Simplot, created the raw material for french fries in the form of peeled and frozen potatoes. Before the JR Simplot company supplies raw materials for fried potatoes, potatoes need to be manually peeled and cut into all McDonald's branches. JR Simplot frozen potatoes managed to shorten food preparation time and helped drive McDonald's franchise expansion.

Belgian people claim that French fries are from Belgium, although this claim is not supported by strong evidence. Belgian people like to eat fried potatoes. In 2002, the average Belgian spent €6.01 to buy fries, including fried potatoes purchased at fast food restaurants. The Belgian historian Jo Gerard states that the recipe for french fries has existed in Belgium since 1680. At that time, poor people in the River Meuse valley between Dinant and Liège had a habit of eating fried small fish. In winter when fish are not available because of the frozen river, they fry potatoes that are cut into equal lengths.

In 1857, the newspaper "Courrier de Verviers" published an article about a Belgian businessman named Fritz who sold fries at the fair and dubbed him "king of fries". In 1862, the "Max en Fritz" fries outlet was established in the city of Antwerp, in a location close to Het Steen.

According to the Belgian story, the British army who came to Belgium during World War I had tasted Belgian-made fries and named it "French" because at that time French was the official language in the Belgian army. Fries are usually fried until submerged in liquid cooking oil or solid cooking oil at a temperature of 190°C until the surface of the potato is golden yellow and slightly crisp.

"French Fries" is at the 11th Position in this list. 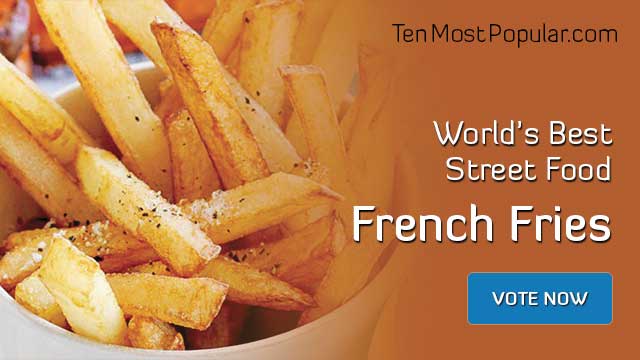