The sport shooting is a sport that involves testing precision and concentration in the handling of a firearm or compressed air. All the rules are governed by the International Shooting Sport Federation (ISSF), an international organization based in Germany, is the organization that governs sports shooting internationally and is responsible for holding regular competitions and events in each of its disciplines. The practice of this sport requires training and discipline, being essential the use of personal protective equipment (PPE), protective goggles and hearing protection.

The Olympic sport shooting program consists of 15 different events: 9 for men (M = male) and 6 for women (F = female), in three different disciplines, five shooting events with carbines, five with pistols and five for shot to the plate with shotgun. The Olympic program was changed for the Olympic Games in Beijing 2008 and the number of shooting events went from 17 to 15. Despite the reduction, there was more participation, 390 shooters from more than 100 countries participated in that edition of the JJ .OO.

The shot to metal silhouettes

This sport was originated in Mexico. It consists of shooting 10 targets at different distances, from 25 m, up to 500 m.

Two types of sights are used, the so-called "open" used in the modality of 100 m pigeon with Cal. 22 and the telescopic sight, used in the remaining balconies as well as carbines and pistols caliber .22 LR, and for the most distant distances carbines of high power not greater than 8 mm or magnum type.

Shooting in the standing position: air rifle and 4.5 mm caliber (0.177") bullets The maximum weight of the weapon is 5.5 kg, 60 shots are made in standing position, in a period of 85 minutes in the male test, in the female the only variations on the previous one is that 40 shots are made in 50 minutes. The objective, in both categories is 5 cm in diameter and is divided into 10 rings scored between 0 and 10. No sights are used Optical magnification but the so-called "closed sights." It is shot in covered galleries.

The shots are made in standing position and with the gun held by one hand. This modality is Olympic and only has the masculine category. A 22LR semi-automatic pistol and trigger with a minimum resistance of 1 kg is used. The competitor performs 12 sets of five shots against five different targets of the type called "duel" divided into scoring zones of 5 to 10 points. The target is 25 m away, totaling sixty valid shots. At a signal, the five targets appear simultaneously, each receiving a shot. In the first two series it is necessary to fire five shots in eight seconds, the next two in six seconds and the two final in four seconds. In the second part, the same series is repeated. It begins with a series of test shots to eight seconds. Optical magnification sights are not used and the gun must have certain dimensions and weights.

Shooting at the plate

The tests are divided into pit (Trap), double pit and Skeet (clay pigeon shooting). The weapon is a 12 gauge shotgun. The tests have few differences. In the Olympic pit and in the skeet there is a qualifying phase, in which 125 targets made of bitumen and lime (called dishes, with 11 cm in diameter), are launched in five series of 25 plates, usually three series on the first day and two on the second. At the end of the qualifying phase, the six shooters with the highest sum of broken plates dispute a final series in which the number of plates broken in the final is added with the score of the qualifying phase, to determine the winner. The dish is classified as good when a piece visible to the judge is broken, if the plate does not break, it is considered "lost plate" or "zero". In the double pit there are 150 plates thrown in a day, in three series of 50 plates, plus a final of 50 plates. In the Trap, 4 series of 25 dishes are launched, considering the best results of each shooter. Optical magnification sights are not used.

This modality has both categories: male and female. With a 4.5 mm caliber air gun and 500 g trigger weight, the shooter fires forty shots (thirty women) distributed in eight series (six for women) of 5 shots each with a duration of 10 s each series (plus a first test series) on 5 folding and different targets (a single shot on each target). The white is 6 cm in diameter and the distance to the target is 10 meters. The competitions take place in a covered gallery.

This modality has both categories: male and female. It is fired with a 4.5 mm caliber compressed air gun and a trigger weight of 500 grams. The men perform forty shots divided into eight sets of five shots each in a time of 10 seconds. The women shoot thirty shots in the same conditions as the men. Before the beginning, he makes a series of 5 shots in 10 seconds. The target is 16 cm in diameter divided into concentric scoring zones between 0 and 10 points with black visual from 7 to 10. Distance to white 10 meters. These tests are contested in covered shooting galleries.

It is a very special type of the shot since not only the score of the accuracy is evaluated but also the speed and power with which the test is scored. The competition is composed of different exercises and the aim of the shooter is not only to make each one with the best score but also in the shortest possible time. Both the targets and the distances are different: The targets are paper, called IPSC Target with different scoring zones and are between 2 and 50 meters. The metallic ones they are Poppers, mini Poppers and discs or plates between 15 and 30 cm in diameter. The expert who designs the competition can use the imagination in such a way that one exercise is never the same as another or a competition equal to the previous or following ones. The classifications are divided according to the weapon used and, within it, by age and sex of the shooter.

"Shooting sport" is at the 9th Position in this list.

List of Best Hobbies | Hobby Ideas for Your Free Time 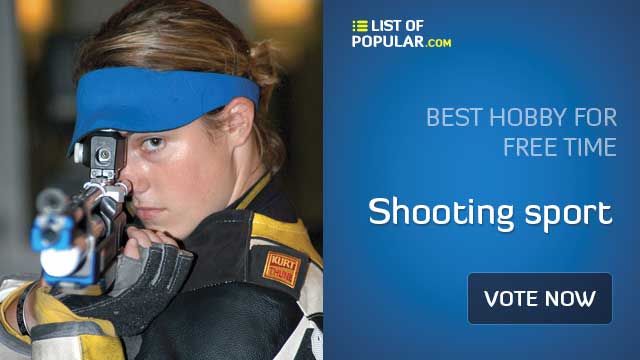