Temple of Artemis at Ephesus

FacebookTwitterWhatsAppEmail
The Temple of Artemis or Temple of Diana was one of the Seven Wonders of the Ancient World, located in Ephesus. It was the largest temple in the ancient world, and for a long time the most significant achievement of Greek civilization and Hellenism, built for the Greek goddess Artemis, hunting and wildlife. It was built in the sixth century BC in the wealthiest port of Asia Minor by the Cretan architect Quersifrão and by his son, Megumi.

It was composed of 127 marble columns, 20 meters high each. Two hundred years later it was destroyed by a great fire, and re-erected by Alexander the Great. Today, after successive earthquakes and looting, only a solitary column of the temple reopened by German archaeologists in the nineteenth century stands.

The first sanctuary preceded the Ionian immigration in many years and dates of the Bronze Age. Callicum, in his Hymn to Artemis, attributed this to the Amazons. In the 7th century BC, the temple was destroyed by a flood. Its reconstruction began around 550 BC, under the Cretan architect Quersifrão and his son Mages, at the expense of Croesus of Lydia, the project took 10 years to complete. The temple was destroyed in 356 BC by an act of fire by Herostratus and was rebuilt again, this time as the Wonder.

The archaic temeton under the later temples clearly housed some form of "Great Goddess", but nothing is known about their worship. The literary accounts that describe it as "Amazonian" refer to the later founding myths of the Greek emigres who created the cult and temple of Artemis Ephesia. The wealth and splendor of the temple and the city were interpreted as evidence of the power of Artemis Ephesia and were the basis for its local and international prestige: despite the successive traumas of the destruction of the temple, each reconstruction was a gift and an honor to the goddess. A large number of people went to Ephesus in March and early May to participate in the main procession for Artemis.

"Temple of Artemis at Ephesus" is at the 22nd Position in this list. 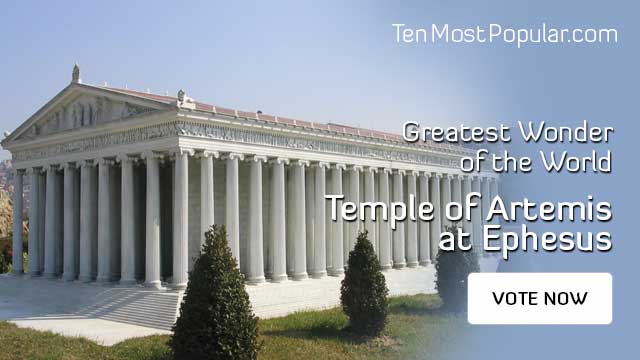 Total Votes: 78
Votes received:1
Up votes:1
Down votes:0
1.52% Popularity
100% Up votes
0% Down votes
Go to voting page
Comments on Temple of Artemis at Ephesus
Submit
Cancel