Stonehenge is a megalithic monument from the Young Stone Age, close to the town of Amesbury in the English county of Wiltshire and about 13 kilometers northwest of Salisbury on the Salisbury Plain. Dating from 2008, the construction of Stonehenge was set at 2300 BC, 300 years later than previously assumed.

The monument consists of an earthen wall around a circular arrangement of large, primitively carved, standing stones and is one of the most famous prehistoric locations on earth. Although the word "henge" is derived from stonehenge, it is not a real henge.

The structure plus surrounding area are added in 1986 at the World Heritage of UNESCO, at the same time with the henge monument of Avebury under the registration Stonehenge, Avebury and associated sites. It is also an antique structure protected by law by the British government. Stonehenge itself is owned by the Crown and is managed by the English Heritage organization. The surrounding lands are owned by the National Trust for Places of Historic Interest, commonly known in the United Kingdom as the National Trust.

A henge is a round or oval type of Neolithic earthenware consisting of a wall and ditch with one or more passages. Most specimens are known from Great Britain.

The Stonehenge Complete book by Christopher Chippindale says that the name Stonehenge comes from the old English words stān which means "stone" and hencg, which corresponds to the English hinge, or "hinge", "connection" (because the stone beams are connected) with the raised stones). Another possibility for the meaning of the henge part is the old English hen (c) and what "hanging" or "gallows" means. Medieval gallows often had the structure of the standing stones connected by a horizontal beam like with Stonehenge. Rather than the inverted L-shape that was used more often later.

The henge suffix is used by extension for prehistoric monuments with a circular structure like Stonehenge. Archaeologists define a henge as a structure consisting of a circular raised enclosure with an internal moat. Stonehenge is an exception to this because the canal is outside the enclosure. Stonehenge was built in the same time as other henges from the Neolithic. Yet in many ways it is atypical and only related in form to other stone circles.

The Stonehenge complex was built in different phases that together span at least 3000 years. There is evidence of activities before and after the actual construction phases, so that the time span of "use" of the monument can be estimated at 6500 years.

Four (perhaps five) piles have been found under the current tourist parking area near the site. They could be dated to around 8000 BC.

The first monument consisted of a circular elevation with a moat of 110 meters in diameter in the open grassland. There was a large entrance in the northeast (like the current one) and a smaller one in the south. The builders placed the bones of deer and cattle and a few flint tools in the bottom of the canal. The bones were much older than the antlers used to dig the moat, the people they buried apparently had saved them for a long time before they were buried. The lime that was dug out of the canal was used to construct the elevation. 56 pits were also found in the outer edge that possibly contained piles.

There is no longer any visible proof of the second phase. From the number of piles that date from this period, one could see that a wooden structure was built within the enclosure in the early third millennium BC. Several standing posts were placed at the northeast entrance and also at the southern entrance. The piles were smaller here than those of Stonehenge 1 (about 40 cm). The larger pits of the previous phase were used more and more as a cemetery. The canal was also used as a cemetery of axes after a cremation. At least thirty different cremations were found in no time. As a result, Stonehenge is increasingly being interpreted as a cremation and cemetery, the oldest known in the United Kingdom. Fragments of unburned human bones were also found in the canal. The found shards of pottery in the immediate neighborhood contributed to dating.

Excavations showed that around 2600 BC building with wood was abandoned in favor of stone. Holes were found in the center of the site in the form of two concentric open circles. These are the so-called Q and R holes. The holes contain up to 80 standing stones. Until recently it was thought that people brought the stones from Wales to the construction site. According to a newer theory, they have been moved by glaciers. Other standing stones were later used as lying stones. The four-tonne stones were carved from spotted dolerite from the Ordovician, but there were also ryolite, tuff and calcareous lava rock. Each stone was 2 meters high, 1 to 1.5 meters wide and about 80 cm thick. The stone that became known as the Altar Stone came from South Pembrokeshire or Brecon Beacons and probably stood in the monument as a single large monolith.

In the next important phase of construction activities at the end of the third millennium BC. 30 huge sarsen stones from the Oligocene - Miocene were brought to the site. Pin and hole connections were used to stack the stones. The horizontal stones that were on top were interconnected by a tongue-and-groove connection, also a classic woodworking joint. The 25-tonne stones were worked with the clear idea in mind of the open circle. The lying stones were slightly bent. The standing stones were wider upwards, to enhance an effect of height. The insides of the stones were finer worked than the insides. Within the outer circle, five trilithons were placed in the shape of a horseshoe, with the open end toward the northeast. They were gigantic stones of 50 tons each connected in the same way as those of the outer circle. Of the largest trilithon, only one stone is still standing. It sticks out 6 meters 70 above ground, 2 meters 40 is below ground.

The carved figures of a "dagger" and 14 "ax heads" were found on one of the sarsen stones. More ax heads were found on 3 other stones. The images are morphologically conforming to the weapons of the Bronze Age. This period was dated on the basis of carbon dating between 2600 and 2400 BC. In the immediate vicinity of the site 2 graves were discovered that date from a somewhat later time. 3 kilometers west of Amesbury the "Amesbury Archer" was found in 2002, and the "Boscombe Bowmen" in 2003. The "Stonehenge Archer" was already discovered in 1978 in the outer canal of the monument.

During this period, 2 kilometers from Stonehenge, a large wooden circle and another Avenue were constructed on the Durrington Walls site. Positioning in front of sunset and sunrise on Midsummer and Midwinter day is the opposite of Stonehenge, so it is not unlikely that there were processions from one circle to another on the shortest and longest day of the year. It seems that the circle in Durrington was a land of the living, with Stonehenge being the land of death.

Later in the Bronze Age the blue stones were straightened for the first time. Exact data is still missing on this. The notches show that the stones may have become part of a structure made of wood, one by one.

Blue stones were rearranged to an oval structure in the center. The altar stone may have been placed upright. The newer constructions were less thoroughly anchored in the soil, so that some stones started to tilt during this period. After this period only minor adjustments were made to the monument.

Shortly thereafter, the northeastern section of the circle was removed from phase 3 V, mirroring the shape of the central sarsens. Seahenge also comes from Norfolk from this period.

The period in which the monument was last used is the Iron Age. Roman and medieval coins and artifacts were dug up inside and outside the monument, but it is not known whether the site still had a real function at that time.

Through carbon dating of cremated human remains found at Stonehenge, archaeologists at the University of Sheffield have been able to demonstrate that the monument was used as a cemetery from its inception just after 3000 BC. until after the stones were erected around 2500 BC. Experts believe that the human remains, the tombs are of course members died of a single elite family and its descendants, probably a dynasty of rulers.

Excavations supported by National Geographic on the Durrington Walls site at the Stonehenge World Heritage site revealed a huge settlement that housed hundreds of people. Archaeologists believe that this settlement was inhabited by the builders of the Stonehenge monument.

Copper oxide has been found under one of the stones of Stonehenge, which could mean that a copper object was buried there as a sort of 'construction sacrifice'. See also Excavations at Stonehenge for more information.

In September 2008 British archaeologists made new findings public, they were the first to have been allowed to conduct research at the complex since 1946. They date the construction of Stonehenge at 2300 BC, three hundred years younger than previously assumed. According to them, the function of the complex was a health center. Many skeletons have been found, of which not all come from the nearby area, with physical disorders. Archaeologists see Stonehenge as an ancient Lourdes. According to the researchers, the blue stones (from Wales) in particular had an important function.

Every year many people come together to experience the solstice together, the sun then rises behind the Heel Stone.

Stonehenge is also very famous among divining runners. They believe that the place would contain a crossing of so-called ley lines. One of these ley lines would exactly end up under the cathedral in Avebury.

Similar megalith constructions - although not of the same size - can be found in:

Not megalithic, but also similar to Stonehenge:

The current Stonehenge has been considerably restored and the condition of the monument does not correspond to the Stonehenge as it looked in the 18th century. Proof of this can be found by comparing drawings and photos with the current structure. A number of monoliths were cast into a concrete base during restoration, while other monoliths and stone arches were moved or erected. This has made it even more difficult to say what the original intention of the original builders was. Critics also claim that the topography around the monument has intentionally changed.

"Stonehenge" is at the 7th Position in this list. 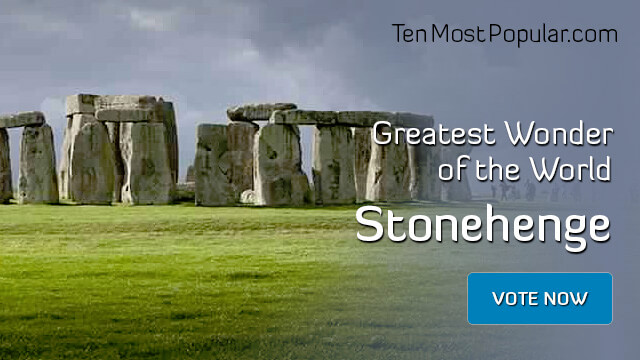