Statue of Zeus at Olympia

FacebookTwitterWhatsAppEmail
The Statue of Zeus at Olympia was a Chryselephantine sculpture sculpted by Phidias. Located in Olympia (Greece), it was considered one of the Seven Wonders of the Ancient World. It was destroyed and lost in the fifth century AD., and only it is known thanks to descriptions of old historians and representations in currencies.

Traditionally it has been believed that the statue was made towards the end of the life of Phidias, around the year 430 BC., but some historians think, however, that it could have been done before the statue of Athena Partenos (made in 438 BC), supporting, among other arguments, that the different lighting conditions of both sculptures in their respective locations suggest that Phidias tried to improve the adaptation to his building with respect to the Zeus of Olympia in the Athena Partenos.

The statue occupied the entire width of the temple hall built to house it. According to a contemporary source it was approximately twelve meters high. Zeus was sculpted in ivory (or modeled, because in the realization the ivory was soaked in a liquid that made it more malleable), and the golden details were solid gold.

According to Pausanias, Zeus was sitting on a throne with his torso naked and the mantle around his legs, his head was crowned with olive and the look, directed downwards, gave him a paternal aspect. In the right hand he held a Nike and in the left the scepter finished off by an eagle, the mantle was adorned with lilies and the sandals were made of gold. The throne was in itself a work of art, made of ivory, ebony, gold and precious stones, the back, the arms, the feet and the crosspieces between them were carved and decorated with reliefs later copied and reproduced separately, as in the case of the sculpture Athena Partenos. Special repercussion had the relief with the slaughter of the children of Níobe, sculpted on the crosspiece of the front legs of the throne.

As he had done in Athens, to decorate the base of the statue of Zeus, Phidias chose the theme of the birth of a divinity, in this case Aphrodite, and treats it again as an event of cosmic order witnessed by Olympian gods and divinities Astral Pausanias says that Aphrodite was seen, that emerged from the sea and was welcomed by Eros.

"Statue of Zeus at Olympia" is at the 39th Position in this list. 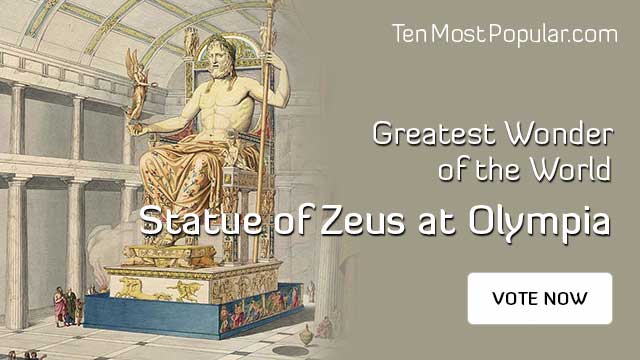 Total Votes: 58
Votes received:0
Up votes:0
Down votes:0
0% Popularity
0% Up votes
0% Down votes
Go to voting page
Comments on Statue of Zeus at Olympia
Submit
Cancel