FacebookTwitterWhatsAppEmail
Petra is a historic town located in the Ma'an Governorate, Jordan, famous for its stone-shaped buildings and water vehicles system. It was founded in the sixth century BC by the Nabataeans as their capital. It is believed that its construction work began around 1200 BC. It is a famous tourist spot in the modern era. Petra is built on the slopes of a mountain called "Hor" and is located in a gorge surrounded by mountains. This mountain is the eastern boundary of the Valley called "Wadi Musa", which runs from the Dead Sea to the Gulf of Aqaba. Petra is a World Heritage Site by UNESCO. The BBC has also included Petra in its "50 Places To See Before You Die".

From the 6th century BC, Petra was the dominant capital of the Nabataean empire. After which the empire was absorbed in the Roman Empire in 106 AD and the Romans continued to expand the city. An important center for trade and commerce, Petra continued development until a devastating earthquake destroyed buildings. After this, after the conquest of Muslim Sultan Saladin of Middle East in 1189 AD, Petra was abandoned by Christians.

After the formation of Trans-Jordan, the first real excavation of the site was in 1929 AD. Since that time, Petra has partly become Jordan's biggest tourist attraction due to the exposure of Steven Spielberg's film "Indiana Jones and the Last Crusade" in 1989. Petra was chosen as one of the world's seven new wonders in July 2007 due to Petra's outstanding engineering achievements and well-protected dimensions.

"Petra" is at the 4th Position in this list. 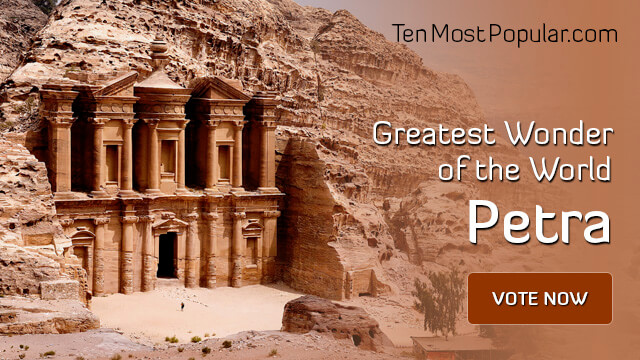