The Pharos in Alexandria (Greek: Φάρος της Ἀλεξανδρείας, Latin: Turris Pharia or Pharus Alexandrinus) is generally regarded as one of the seven classical wonders of the world. The tower bore the same name as the small island off the coast of Alexandria on which it was built.

The Lighthouse of Alexandria was a tower built in the third century BC C (between 285 and 247 BC) on the island of Faro in Alexandria, Egypt, to serve as a reference point of the port and as a lighthouse with an estimated height of 100 meters. It was one of the tallest man-made structures for many centuries, and was identified as one of the Seven Wonders of the Ancient World by Sidon Antipater. It would be shot down by the effects of an earthquake in the early fourteenth century.

It was built by architect Sóstrato de Cnido during the reign of Ptolemy II on the island of Faro (Pharos), in front of Alexandria. It consisted of a large tower on which a night bonfire marked the position of the city to sailors, given that the coast in the Nile delta area is very flat and therefore lacked any reference for maritime navigation.

Its height reached 134 meters and in its construction large blocks of glass were used that were located in the foundations to prevent erosion and increase resistance against the force of the sea. The building, erected on a square base platform, was octagonal in shape and was constructed of marble blocks assembled with molten lead. In the highest part a large metallic mirror reflected the sunlight during the day, and at night it projected the luminosity of a large bonfire at a distance of up to fifty kilometers.

Together with the Mausoleum of Halicarnassus, the lighthouse managed to survive an entire millennium intact. However, it was severely damaged by the earthquakes of 1303 and 1323 to the point that the seasoned Arab traveler Ibn Battuta wrote that he had been unable to enter the ruins.

The remains disappeared in 1480 when the Sultan of Egypt Qaitbey used the stone blocks of the ruins to build a fort.

There is currently a lighthouse reconstruction project (estimated at 48 million dollars), powered by several European Union countries (France, Germany, Italy and Greece) that are willing to include the Lighthouse in the ambitious Medistone project, conceived to recreate and preserve the architectural monuments of the Ptolemy era.

As far as is known, it was the first lighthouse ever built and this was done by Sostratos of Knidos on behalf of the first Hellenistic king of Egypt Ptolemy I Soter I and came ready during the reign of his son Ptolemy II Philadelphus. The tower was built between 297 and 283 BC and has served for nearly 1500 years for the Greeks, Romans, Byzantines and Arabs.

Because the coast of Egypt had no natural beacons, the tower served as a beacon during the day and (from the first century BC) at night as a lighthouse. It was the largest lighthouse in antiquity, built from white natural stone and white marble in three floors: a square base, an octagonal structure above it and finally a round crown. Probably at the very top was a giant statue of the sun god Helios. The fire was visible 80 km away. Oil may have served as fuel. Plates of shiny polished iron or bronze reflected the flame towards the sea like mirrors. The estimates of the total height vary: sources from antiquity mentioned 130 and 180 meters high.

According to Arabic and European travel stories, the lighthouse served until around 1375 when a major earthquake caused the light installation to collapse into the sea. After that the tower was not repaired anymore. By the 15th century it had fallen into a ruin. The remaining first floor was processed in the 16th century in a fortress that still stands on Pharos.

Over the centuries, the island on which the tower stood has become a peninsula because of siltation from the Nile. In 1994, a French/Egyptian diving team began investigating the area and discovered large blocks of stone in the sea that were probably part of the lighthouse.

In many languages, the name of the island has changed to that of a 'light beacon' or 'lighthouse', but also on the headlights of a vehicle.

Archaeological excavations on the site of Fort Qaitbay only became systematic only since the second half of the XXth century. While the presence of blocks submarines was known since the xviiith century, these blocks have not been studied before 1960 and more or less realistic image we had of the lighthouse before that was most often based on ancient texts as well as legends.

The first really serious study of the lighthouse (not the website) is that carried out by Hermann Thiersch early xxth century and was supported by the Greco-Roman museum. He listed all the sources that existed up to then to arrive at a fairly faithful description of the lighthouse at different times. For Thiersch, the lighthouse was still in Fort Qaitbay's dungeon. Around 1916, a French engineer by the name of Jondet carried out surveys and confirmed this hypothesis. But the fort, which was a military construction, was inaccessible and it was not until the beginning of the underwater explorations to really study the remains of the lighthouse.

These explorations began in the early 1960s with an Alexandrian amateur diver and archaeologist, Kamel Abul Saadat, who was the first to explore the harbor entrance and draw attention to the blocks there. In 1962, he convinced the Egyptian navy to bail out a colossal statue of Isis and in 1968, Unesco sent the Scottish archaeologist Honor Frost with whom Kamel Abul Saadat established the plan of the seabed. In 1975, she published the first scientific article on the ancient site in the International Journal of Nautical Archeology. In 1992, the archaeologist Franck Goddiomaps the eastern port of Alexandria through a systematic study of the seabed.

Following the unfortunate immersion of large blocks of concrete at the foot of the lighthouse, the Antiquities Department asked the Alexandrian Studies Center (CEAlex), created by Jean-Yves Empereur, and his team of divers to study the funds surrounding Fort Qaitbay. Since 1994, more than 3,000 blocks, more than two-thirds of which are architectural blocks, have been identified. For this, dozens of blocks have been raised to the surface with balloons but it is hard work and this explains the slow pace of work in the area. The CEAlex still managed to completely map the site, and all that remains is to study the blocks.

Many fragments of columns have been found but their bases and capitals are on the other hand rarer. Indeed, they have often been reused in later constructions (mosques, cisterns). It was also found half a dozen columns imported Alexandria and bearing cartridge of Ramses II Twenty-eight sphinx dating from different kingdoms (Sesostris II, Psammetichus II) and obelisks signed Seti Ist.

But it was obviously to prove that these blocks actually came from the lighthouse. Door frames, for example in granite from Aswan, have been found, particularly massive: 11.5 meters high and weighing more than seventy tons. It is therefore difficult to imagine that these blocks could be moved easily over very long distances. And they were found at the foot of Fort Qaitbay. When comparing these data with ancient sources that indicate that the lighthouse was on the site of the fort and that it was destroyed by earthquakes, it can be assumed that these doorframes come from the lighthouse. In addition, a source of xiith century reveals that the lighthouse parts were sealed to each other by molten lead and during the excavations we found blocks where were fixed lead pins, metal which is also found in large quantities in the area surrounding the fort. A CEAlex researcher, Mourad El Amoury, has conducted studies on the methods of assembly between the sealing cavities present on the architectural elements and the sealing seals found during the excavations, confirming this sealing technique used during the construction of the Lighthouse.

The location of the lighthouse had, however, been questioned by Jean Yoyotte who, in his comments on Strabo's Voyage en Egypte, found this theory "questionable". He relies for that on the blocks of stone found at the foot of Fort Qaitbay whose disposition on the site does not correspond, according to him, to the order that should have been observed following a collapse. For Yoyotte, one should not overlook the hypothesis that it could actually be artificial reefs built to protect the coast from enemy ships. However, this hypothesis is refuted by the results of the excavations carried out.

The UNESCO plans to include the site of the ruins of the Alexandria lighthouse on the World Heritage List. The Egyptian authorities are seeking, in collaboration with the Secretariat of the UNESCO Convention on the Protection of the Underwater Cultural Heritage, how to enhance this cultural heritage. The option of an underwater museum allowing visitors from all over the world to discover vestiges without risk of degradation and scientists to study it is preferred, a feasibility study began in 2009.

"Lighthouse of Alexandria" is at the 5th Position in this list. 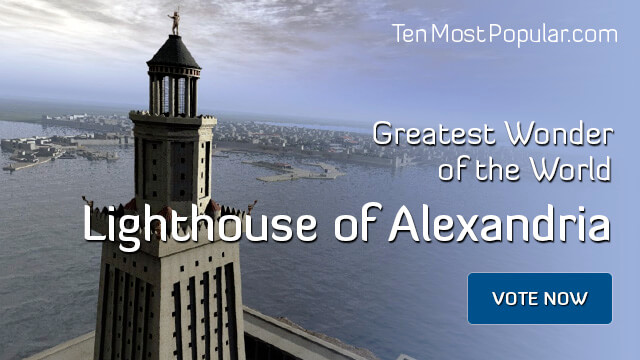