FacebookTwitterWhatsAppEmail
Leaning Tower of Pisa (Italian: Torre pendente in Pisa or abbreviated Torre in Pisa), or better known as the Tower of Pisa, is a campanile or bell tower of a cathedral in the city of Pisa, Italy.

The Tower of Pisa was actually made to stand vertically like a bell tower in general, but began to tilt shortly after its construction began in August 1173. It is located behind the cathedral and is the third building of the Campo dei Miracoli (rainbow field) of the city of Pisa.

The height of this tower is 55.86 m from the lowest land surface and 56.70 m from the highest ground level. The width of the wall below reaches 4.09 m and at the peak of 2.48 m. Its weight is estimated at 14,500 tons. The Tower of Pisa has 294 steps. With the existence of this tower, the economic income sector will increase due to the presence of tourism objects.

The Pisa Tower is also accepted as one of the UNESCO World Heritage Sites.

The construction of the Pisa Tower was carried out in three stages in a period of 200 years. Construction of the first floor of the white marble campanile began on August 9, 1173, which was an era of military prosperity. The first floor is surrounded by pillars with classic letters, which are angled towards the arch of the blinds. In fact, the Leaning Tower should have stood at a height of 55 meters, but because the Leaning Tower of Pisa was built on unstable ground, the Tower was finally sloping from a 5 meter straight line.

There was controversy about the identity of the architect of the Leaning Tower of Pisa. For several years the designer was predicated on a prominent 12th-century local artist in Pisa, who was popular with his bronze prints, especially in the Pisa Duomo. Bonanno Pisano left Pisa in 1185 to Monreale, Sicily, only to return home and die in his hometown. The sarcophagus was found at the base of the tower in 1820.

"Leaning Tower of Pisa" is at the 14th Position in this list. 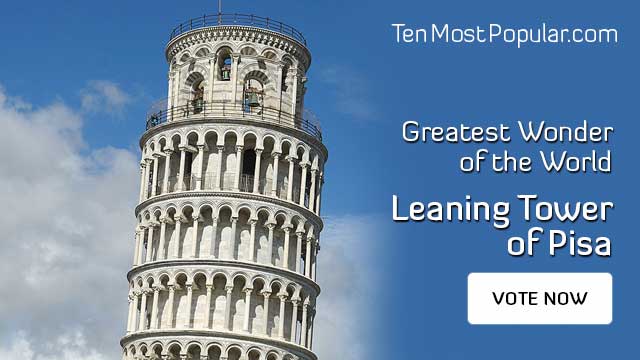