FacebookTwitterWhatsAppEmail
Hanging Gardens of Babylon (also known as the Semiramis Hanging Park) and Babylon walls are among the Seven Wonders of the Ancient World located in Al-Hillah, 50 kilometers south of Baghdad, Iraq on the eastern cliff of the Euphrates River.

Hanging Gardens is actually not really "dependent" like being tied to a rope. Its name derives from the translation of the Greek word Kremastos or Latin penilis, which means not only "dependent" but "raised" as it is located on a porch or a terrace.

This park was built by Nebuchadnezzar II, the famous grandson of King Hammurabi, around 600 BC as a gift for his wife who missed his home, Amyitis. Amytis longed for the trees and plants of his fragrance in Persia, whereas in other writings it was said that the wife of Nebuchadnezzar II was named Amuhia. This park is estimated to have been destroyed around 2 BC. Then this hanging garden was documented by Greek historians such as Strabo and Diodorus Circulus.

The oldest historical sheet that records architectural works equipped with a garden as a form of love for someone who is very loved is in Mesopotamia, ancient Iraq. In the records of Herodotus, an ancient Greek writer, it was mentioned that when King Nebuchadnezzar II, who became king of the new Babylon Kingdom (605-562 BC), had ordered to make a very beautiful hanging garden, as a gift to Amytis, his beloved queen.

Hanging gardens are a form of Mesopotamian landscape architecture, which has been known to the people of Mesopotamia since the reign of King Hammurabi in the old Babylon Kingdom (1792-1750 BC). Among the tall city buildings sticking out on the ground are usually planted with beautiful plants, so that from a distance it looks like a hanging garden.

The hanging garden built by King Nebuchadnezzar II, whose peak of glory was around 612 BC, then became very famous throughout the world and was admired by its design today. This Hanging Gardens of Babylon later became the great monastery of the Kingdom of Babylon, which was second to none. The area of ​​the park is estimated to be 4 acres (16187.4 m²). Its architectural form is very unique, because it is multilevel. The park is planted with a variety of beautiful trees and equipped with irrigation systems up to a height of 100 meters above the ground. From the top of this park you can see the scenery around the Babylonian Kingdom.

"Hanging Gardens of Babylon" is at the 13th Position in this list. 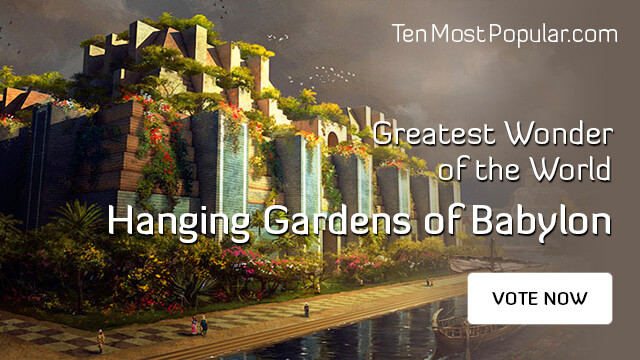