The Great Wall of China is not long, but is a collection of short walls that follow the shape of the mountains of northern China. On April 18, 2009, after an accurate investigation by the government of the People's Republic of China, it was announced that the giant wall constructed during the Ming Dynasty period was 8,851 km.

According to historical records, after a long wall was built by Ming, the term "changcheng" was known. Previously the term was not found. The term "Great Wall of China" in Chinese is "wanli changcheng", meaning "wall that is 10 thousand li long". Today the term is officially used.

The Great Wall of China is said to be one of the man-made buildings seen from space with the naked eye. However, after an investigation by astronauts, this perception was incorrect. From low orbit, man-made buildings such as roads, ships, cities and others can indeed be seen, but when passing through the orbit of the earth with tens of thousands of feet high, none of the objects on the surface of the earth can be seen, including The Great Wall of China. This was confirmed by NASA statement: "The Great wall can only be seen from the Shuttle, so it won't be possible to see it from the moon with the naked eye".

"Great Wall of China" is at the 11th Position in this list. 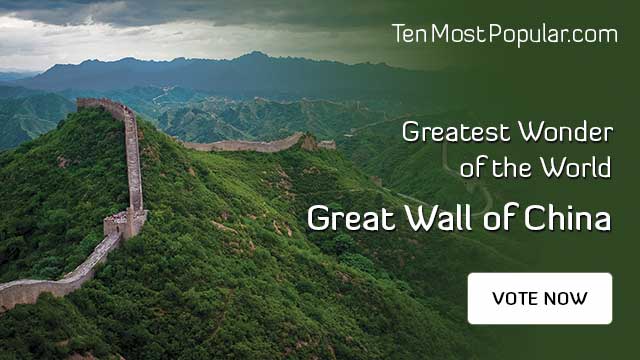