FacebookTwitterWhatsAppEmail
Egyptian pyramids are the monuments to be built for the pharaoh in which the bodies of the kings are buried and kept safe. These dead bodies are called Mummy. Along with their dead bodies, food, drinks, clothes, jewelry, utensils, musical instruments, arms, animals and sometimes even the ministerial servants were buried. There are 138 pyramids in Egypt, but unlike belief, only Giza's 'Great Pyramid' is in the list of seven wonders of the ancient world. In the seven ancient wonders of the world, this is the only such monument that could not end the flow of time.

This pyramid is 450 feet high. For 43 centuries, it was the tallest structure in the world. In the 19th century, the record of its height was broken. Its base spread over 13 acres, which is about 16 football grounds. It is made up of 25 lakh limestone segments, each of which weighs between 2 to 30 tons. The Great Pyramid is made so precision that the current technique can not repeat such a work. Until a few years ago, the scientists could not find the microscopic symmetry, the only thing to make a model is far away! Evidence shows that it was built as a grave by the fourth dynasty of Khufu, ruler of Egypt, about 2,560 years ago. It takes about 23 years to build it.

This great pyramid of Giza has often been questioned that how did Egyptians without machines, without modern tools, deliver huge stones to 450 feet high and completed this big project in just 23 years? Pyramid penetrating Ivan Waddington calculated that if this happened, it would be necessary for dozens of workers to keep a stone section in every 2 minute during the 10 hours of work 365 days of the year. Was that possible? Apart from the vast work force, would the ancient Egyptians have had astral mathematical and astronomical knowledge? According to experts, the stone blocks outside the pyramid have been sharpened and fit so that a blade can not be inserted in the joints. Several astronomical figures have also been found in Egyptian pyramids, such as the three pyramids are in direct line of three stars of the orion. Over the years scientists have been trying to find out the secret of these pyramids, but no success has been achieved yet.

"Great Pyramid of Giza" is at the 1st Position in this list. 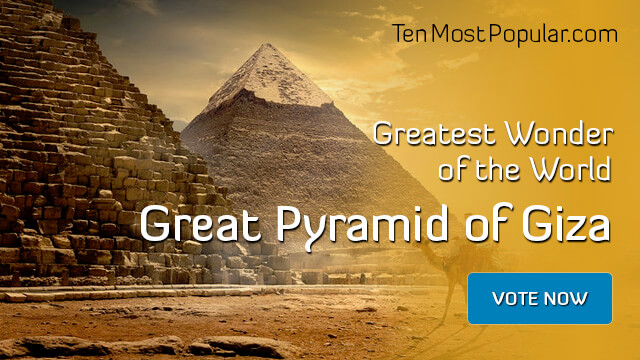