The Flavian Amphitheater (Latin: Amphitheatrum Flavium), better known as the Colosseum, built in the 1st century AD in Rome, was the largest amphitheater in the Roman Empire.

The Flavio Colosseum or Amphitheater is an amphitheater from the Roman Empire, built in the first century and located in the center of the city of Rome. Its original denomination, Flavio Amphitheater, refers to the Flavia dynasty of emperors who built it, its later name, Colosseum, and by which it is best known today, is due to a large statue that was nearby, the Colossus of Nero, which has not reached us. For its conservation and history, the Colosseum is one of the most famous monuments of classical Antiquity. It was declared a World Heritage Site in 1980 by Unesco and one of the New Seven Wonders of the Modern World on July 7, 2007.

The materials used in the construction of this are travertine blocks, concrete, wood, brick, stone (tuff), marble and stucco. In ancient times it had a capacity for about 65,000 spectators, with eighty rows of stands. Those who were near the sand were the Emperor and the senators, and as they ascended the lower strata of society were located. In the Colosseum, gladiator fights and public spectacles took place. It was built just east of the Roman Forum, and the works began between 70 d. C. and 72 d. C., under the mandate of Emperor Vespasian. The amphitheater, which was the largest ever built in the Roman Empire, was completed in 80 AD. C. by Emperor Titus, and was modified during the reign of Domitian. Its inauguration lasted 100 days, participating in it all the Roman people and dying in its celebration dozens of gladiators and beasts who gave their lives for the pleasure and spectacle of the people.

The Colosseum was built by the so-called Flavian emperors. The construction began under the reign of Vespasian in 72 and financed by the booty of the sacking of Jerusalem in 70. After completion in 80, it was initiated by Titus. The games at the opening lasted 100 days. The poet Martialis devoted a bundle of 33 epigrams to it. Titus' successor Domitian added another floor, along with a number of corridors and rooms under the arena, which are now visible.

It was built on the site of the stagnum, an artificial lake, of Nero's Domus Aurea. The Flavian emperors tried to erase the memory of the hated Nero and win back the favor of the people. The construction of the Colosseum precisely at the site of the lake, which they had managed to drain, fit in with that aim. Moreover, the choice for this location saved a lot of earthmoving, since the immense structure required enormous foundations. The lake covered five football fields and was drained by channels that ran to the Tiber River (just below Rome).

Vespasian's amphitheater was the most famous in the Roman world. It became known as Amphitheatrum Flavium - derived from Flavius, the family name of Vespasian, Titus and Domitian. Nowadays the theater is better known as the Colosseum. It probably derived its current name from the over 35 meter high statue, the Colossus by Nero, which stood next to the amphitheater and not on the dimensions of the building, which is often claimed.

The elliptical base measures (measured along the axes) 188 by 156 meters, has a circumference of 527 m. The height of the facade is 48.50 meters. The outer wall has three rows of 80 arches, each separated by half columns, below with Doric, in the middle with Ionic and above with Corinthian capitals. The upper floor (which is mostly closed) also has Corinthian pilasters. There were 76 entries that were numbered with Roman numerals (above the entries XXIII-LIV the numbers are still visible).

The Colosseum is built from concrete, tuff and brick, but large amounts of travertine have been used for the façade and columns, which were brought in from the hills near Tivoli via a specially constructed road. Iron was used to attach the stones together. A large number of seats, wall coverings and ornaments were made of marble. The 1st row of arches is mainly made up of limestone. For the 2nd and 3rd row of arches are red bricks (also called terracotta) and concrete (also called opus signinum) used. This was lighter and this reduced the chance of collapse. The advantage of using arches is that the force is pushed to the pillars. And because the arch is open, less stone has to be used, which again saves in weight. Another advantage of the arches is that they are all the same. This allowed the use of unskilled workers.

The cavea accommodated more than 50,000 spectators. This was divided into four galleries. For the emperor there was a separate lodge on one of the long sides of the arena with its own entrance. On the opposite side was the lodge for the Empress, the Vestal Virgins and the Magistrates. The senators had marble seats right on the arena. Other men, depending on their social position, were close to the arena or further away. The women of senators and knights sat in the fourth gallery. The arena, which was separated from the audience by a wall of 4 meters high, measures 76 by 44 meters, and was filled with yellow sand. At the ends of the longitudinal axis were two artist entrances.

The Colosseum could be covered with a canvas awning: the Velarium. This screen was erected with cables that were pulled from outside the Colosseum over 240 masts. These masts stuck through holes in the cornice in a protruding stone container. A regiment of sailors was present in Rome to raise the velarium. It was estimated that a thousand people were needed to pull up the screen. In the square outside the Colosseum there are still some stones with holes to which the cables were attached, although it is also thought that these stones were used for crush barriers.

Afterwards another hypogeum was added: the underground labyrinth, presumably under the reign of Emperor Domitian. There were 60 trap doors and 30 lifts. For example, tigers could be led to the arena through the shutters and lifts.

There were four gladiator schools in the vicinity of the Colosseum. For the bestiarii there was the Ludus Matutinus, so named because the wild animal fights took place in the morning, and for the 'real' gladiators there were the Ludus Gallicus, the Ludus Dacicus and the Ludus Magnus. The latter was the largest, was closest to the Colosseum and was connected to it by an underground corridor. Part of it has been uncovered by excavations east of the Colosseum.

The Colosseum was entirely intended for the games that were organized and financed by the ruling emperor. At the opening, Titus organized games that lasted 100 days. According to tradition, in addition to many gladiator fights, the most amazing spectacles were to be seen. There was a fight between cranes and a fight between four elephants. Nine thousand tame and wild animals were slaughtered. Women also acted as wild animal fighters.

During normal games in the Colosseum, wild animal fights were held in the morning in which bestiarii (wild animal fighters) fought with all kinds of wild animals in venationes (hunting parties). The arena was set up appropriately with rocks, shrubs, etc. At noon there was a pause program for interested people in which convicted prisoners were thrown for wild animals (damnatio ad bestias). The afternoon program with the gladiator shows (munera) was the highlight.

Shortly after the opening, according to tradition, naumachiae (naval battles) were also held. After the arena was filled with millions of liters of water, famous naval battles from history were staged. It is not clear exactly how this happened because the arena of the Colosseum is actually too small for warships. At least this was stopped after the renovation by Domitian, when two floors were laid under the arena. Other sources report that the naval battles are probably a mistake by the historian Dio Cassius. He wrote in the 4th century how 150 years earlier naval battles were played in a flooded arena. The naval battles probably took place in Naumachie of Augustus, a water-filled arena across the street in Trastevere.

With the rise of Christianity there was increasing resistance to the games. A single emperor, such as Marcus Aurelius, was already against the gladiator fights, but he could not simply abolish them due to the great popularity among the common people. The gladiator fights were abolished after Christianity was elevated to state religion. The Christian Emperor Honorius banned the games in 404, after a monk who wanted to intervene in a battle between gladiators was lynched by the public. After this, the Colosseum remained in use for other performances, mainly venationes, where wild animals were hunted. The last known performance was held in 523.

Historians estimate that between 300,000 and 500,000 people have died in the Colosseum over the centuries.

The Colosseum has suffered from various natural disasters. A lightning strike in 217 damaged the Colosseum to such an extent that no games could be organized for five years. Various earthquakes caused great damage to the building, but as long as the building was in use, it was repaired by the Romans and later by the Ostrogoths. During the Middle Ages, two major earthquakes followed in 847 and 1349, which further destroyed the Colosseum. In the 12th century, the ruins of the amphitheater were converted into a fortress of the Frangipani family. The important Roman families, where often the pope, the Colosseum considered a quarry where simple building material could be obtained for their new churches and palaces. For example, all the marble was removed and reused in new buildings or simply burned to obtain lime. The iron with which the blocks of stone and marble were secured was also sought after. This looting did not end until 1749 when Pope Benedict XIV recognized the historical value of the Colosseum and prohibited further use as a quarry. He consecrated the Colosseum as a church in memory of the agony of Christ and built a Way of the Cross within. The ground of the amphitheater was considered sacred because of the blood of the Christian martyrs shed here. This is despite the fact that most Christians were probably killed in the Circus Maximus. Later popes allowed the Colosseum to be further restored and archaeologically investigated.

Although the Colosseum no longer has its original dimensions, it is still an imposing entity and attracts thousands of tourists every day. In modern times, part of the wooden arena floor has been restored.

Wonder of the world

On July 7, 2007, the Colosseum was chosen as one of the seven new wonders of the world.

The Colosseum is depicted on the Italian 5 cents.

"Colosseum" is at the 2nd Position in this list. 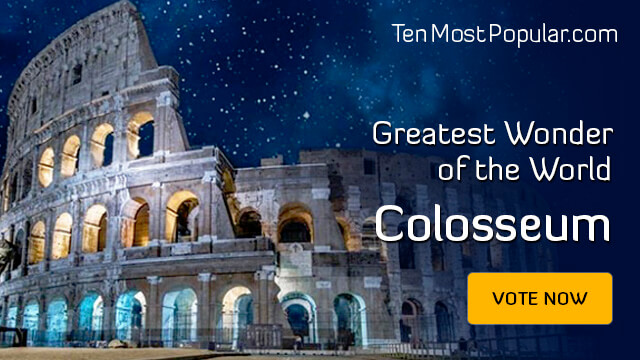