FacebookTwitterWhatsAppEmail
The Statue of Christ the Redeemer is a statue of Jesus Christ in the greatest Art Deco architectural style and is located in Rio de Janeiro, Brazil. The statue is 38 meters high and is located on the summit of Corcovado Mountain which is 710 m high in Tijuca Forest National Park, which overlooks the city. This statue became a symbol of Christianity, and became a symbol of the pride of the city. The hand of the statue that is open is seen by many as a sign of the cross.

The idea of ​​building a large statue atop Corcovado had emerged since the mid 1850s, when Catholic priest Pedro Maria Boss requested funding from Princess Isabel to build a large religious monument. Isabel's daughter did not respond to the gagsan, which was completely forgotten in 1889, when Brazil became a republic, with a law requiring the separation of church from the state.

The second proposal for a large landmark in the form of a statue on the mountain was made in 1921 by the Archdiocese of Rio de Janeiro. The archdiocese organized an event called Semana do Monumento ("Monument Week") to attract donors, mostly from Brazilian Catholics. The designs considered for the "Statue of Christ" included a representation of the Christian cross, a statue of Jesus with a globe in his hand, and a pedestal symbolizing the world. Finally, the statue of Christ the Redeemer with open arms is chosen.

Christ the Redeemer is one of the finalists for the seven new wonders of the world, together with 20 other candidates.

"Christ the Redeemer" is at the 9th Position in this list. 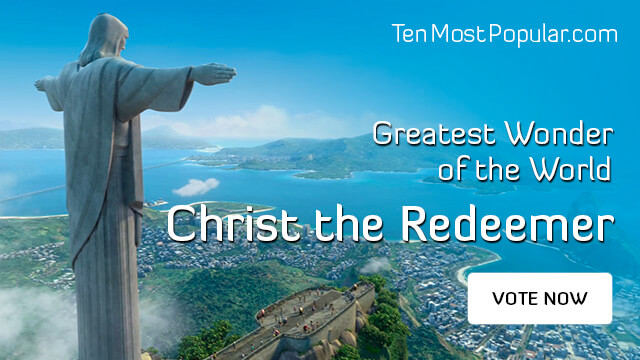