FacebookTwitterWhatsAppEmail
Catacombs of Kom El Shoqafa is located on Bab el Molouk Street, in the Karmouz neighborhood of Alexandria (Egypt). Its bas-relief decorations show a mixture of Egyptian and Greco-Roman art forms, and it is considered one of the most important archaeological sites in the city.

This group of catacombs, dating from the 1st century and the beginning of the 2nd, a period of Roman domination, was discovered in 1892. Also called Catacombs of Alexandria, they are named after the similarity of their design with the Christian catacombs of Rome. It seems probable that it was originally a private tomb, later converted into a public cemetery.

Since its discovery the two lower levels were submerged, after the descent of the water level in 1995 only the lowest is submerged.

It comprises three levels, with numerous passages, lobby, antechamber, burial chamber and niches excavated in the rock. After the entrance there is a circular staircase, on whose walls there are openings to allow the passage of light. Below is a hall with two niches that leads to a circular room, in the center of which there is a roundabout with pillars. On the left there is a camera with four pillars. At the back of the circular room there is another small chamber with two statues. The entrance to the mortuary chamber is decorated with Greek themes, such as Athena or Medusa, and inside there are three large niches each with a stone sarcophagus. The chamber is decorated with Egyptian gods, Anubis and Tot, and its roof rests on four columns.

It is one of the last samples of decoration of the Ancient Egypt, although very influenced by the Greek art.

"Catacombs of Kom el Shoqafa" is at the 28th Position in this list. 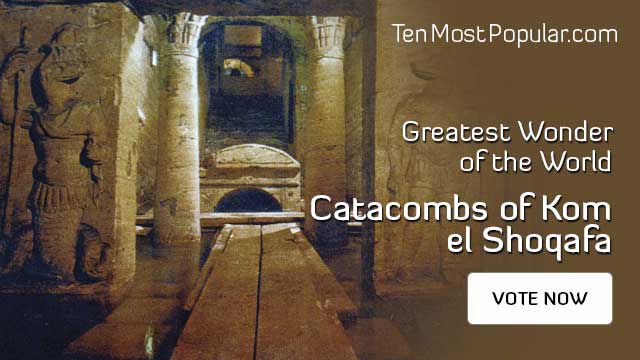