Tetris is a puzzle - computer game designed by Aleksej Pazjitnov. The first playable version came out on June 6, 1984. The game became widely known for being included with the Game Boy game platform from Nintendo in 1989. However, the game's championships are often played on the Nintendo Entertainment System (NES). The name is derived from the word tetromino, because every block consists of four squares and is therefore a tetromino, and tennis, the favorite sport of Pajitnov.

Blocks are constantly falling on the screen from the top of the screen. These blocks have different shapes consisting of four squares, so-called tetrominos. For example, there is a block that looks like an "L", but there is also an O block or I block.

By rotating the blocks and moving them horizontally, the player must ensure that, once they have reached the bottom, they form a horizontally closed line with the other blocks that are already there. Every successfully formed horizontal line is deleted. If this does not happen on time, the layer with blocks will become higher and there will be no more space and time to rotate the blocks.

Aleksej Pazjitnov Tetris wrote on an Elektronika 60 computer in June 1984 while working at the technical university in Moscow. Vadim Gerasimov then made a version for the IBM PC. This version was quickly distributed by the university.

Through the contacts at the university the game ended up in Hungary. There it came under the eyes of a British software company, Andromeda. The owner of the company tried to contact Aleksej Pazjitnov. He had in the meantime given the rights to the software company Spectrum Holobyte. Because Andromeda could not get the rights from Aleksej, they bought the rights from a Hungarian programmer who had made a clone. This lawsuit finally came to a settlement: Spectrum Holobyte had the right to sell IBM PC versions of Tetris, Andromeda was allowed to make versions for other home computers.

Because the rights were sold in (and at the time of) the communist Soviet Union, all revenues from Tetris went to the state and not to the creator Aleksej Pazjitnov himself. It was also unclear to which companies the Soviet government had meanwhile sold the rights - around 1988 various companies claimed to have the right to make and sell Tetris. To put an end to this chaos, the Soviet government withdrew all rights in 1989 and sold them to two companies: Atari for the arcade versions and Nintendo for the home market.

After the Soviet Union was dissolved, Alexey Pazjitnov and Henk Rogers formed the company The Tetris Company LLC ("TTC") to collect (successfully) royalties for Tetris.

Different tetriminos, geometric figures composed of four square blocks joined orthogonally, which are generated from an area that occupies 5x5 blocks in the upper area of the screen. There is no consensus as to the dimensions for the area of the game, varying in each version. However, two rows above are hidden from the player.

The player cannot prevent this fall, but can decide the rotation of the piece (0°, 90°, 180°, 270°) and where it should fall. When a horizontal line is completed, that line disappears and all the pieces that are above descend one position, freeing up play space and therefore facilitating the task of placing new pieces. The fall of the pieces accelerates progressively. The game ends when the pieces pile up to the top (3x5 blocks in the visible area), interfering with the creation of more pieces and ending the game.

There are different versions of the game. The original has seven different pieces. Later licenses added supplementary forms and there are even certain licenses for three-dimensional forms.

The original version of Pajitnov for the Electronika 60 computer used green media to represent blocks. Some people refer to the pieces by the color of which they are painted in a particular version of the Tetris game, but before standardization by The Tetris Company in 2000, these colors have varied version after version, with which call the pieces by their color is meaningless. For example, piece T is different in all versions of the game.

The best-known Tetris melody, Music A from the Game Boy version of Nintendo, is based on a Russian folk song Korobejniki. B Music is a piece from The Nutcracker by Tchaikovsky. Music C is a work by Johann Sebastian Bach, namely Suite no. 3 in b minor, BWV 814, IV. Menuett - Trio.

A countless number of clones have been made of Tetris for various platforms. You can think of other Nintendo consoles, but also the PC, mobile phones and even the (fifth generation) iPod. In addition, Tetris can also be played on photoplay machines that can be found in cafés or snack bars. If one has two Game Boys that can be connected to each other (with a special cable supplied with each Game Boy), one can play Tetris together. If someone can make two or more rows of blocks disappear, one or more rows appear with the opponent. When two rows are disappeared, one appears at the opponent, at three rows two appear, but at four rows four appear.

Some Tetris clones get their own name, usually a variant of 'Tetris' where one or a few letters have been changed.

Tetris is also used in the game program Blocks on the Flemish television VRT, presented by Ben Crabbé. Two opponents must answer quiz questions, with a correct answer, the player may bet two tetris blocks. If a player can form a horizontal line, he or she gets extra points.

The game is included in the book 1001 Video Games You Must Play Before You Die by Tony Mott.

"Tetris" is at the 50th Position in this list. 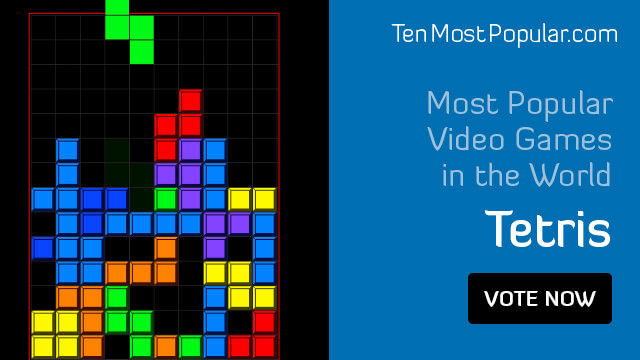