The Little Mermaid is an American animation series from Walt Disney Television Animation, based on the film of the same name from 1989. The series serves as a prequel to the film.

The series has 3 seasons with a total of 31 episodes. It is the first animation series based on a Disney film. Some of the voice actors from the film also play the role of their characters in the series, including Jodi Benson as Ariel, Samuel E. Wright as Sebastian, Kenneth Mars as King Triton, and Pat Carroll as Ursula.

The series is a prequel to the previously released full-length cartoon of the same name. The events of the animated series precede the events of the cartoon, although most of the characters in the series do not appear in the cartoon. In some episodes (season 1, episode 10, season 3, episode 1), Prince Eric appears, but Ariel either does not see him at that moment or sees from afar and therefore is not particularly interested in him. Some of the animated series’ events run counter to the 2008 full-length prequel "The Little Mermaid: The Beginning of Ariel's Story".

Ariel is never shown to people throughout the series except for the episode "Steel Fish", where it helps a man named Hans Christian Andersen get to the surface of the water.

The story is set when Ariel is 15 years old, a year before the events in the film, and following the adventures still as a little mermaid at the bottom of the sea. In the episodes, her relationship with her friends, father and sisters stands out, and they generally involve Ariel frustrating the plans of enemies who intend to harm the kingdom.

Arielle, the Little Mermaid, is the youngest and most adventurous daughter of Sea King Triton. This is what makes Arielle's friend and companion, the crab Sebastian, a lot of trouble, because Sebastian is Hofmarschall and has the job to take care of Arielle. Dangers lurk by dangerous, big fish, the sea witch Ursula or even the world of the people outside the sea. But Arielle is particularly interested in these.

The series is set for the film, so Ariel is still a mermaid and lives with her father and sisters in the royal palace. Many episodes revolve around her relationships with her friends and family, and her attempts to save her underwater kingdom from various dangers.

Many characters from the film return in the series. The sea witch Ursula is a regular antagonist of Ariel in the series. Prince Eric also occasionally plays a role in the series, but he and Ariël never see each other.

The series also introduces some new characters such as the multi-boy Graatje (Urchin), the young orca Stip (Spot), an evil stingray/human hybrid that regularly threatens Atlantica and the Crimean lobster (The Lobster Mobster).

It was produced 31 episodes in three seasons, which was broadcast in the US from September 11, 1992 to November 26, 1994 by the broadcaster CBS and Disney-owned stations. The first season includes the consequences of one to 14, the second episodes 15 to 23 and the last season shows episodes 24 to 31.

The series has been translated among others into French, Spanish, Polish and Portuguese.

In Germany, the series ran for the first time from 1 January 1994 as part of the Disney Club in the ARD. In addition to broadcasts on Disney Channel, Disney Junior and Toon Disney, was The Little Mermaid even with RTL, Super RTL and Kabel eins. In Austria, the station ORF one also broadcasts the series.

Parallel to the second season CBS showed the 13-part animated series Marsupilami on the same cartoon character. As part of this series, the character Sebastian got a total of eight own short films. In Germany Marsupilami first shown from 1 July to 23 September 1995 by RTL and been repeated only once.

Some of the episodes contain musical songs, written specifically for the series. The title song of the series is an instrumental combination of the songs "Part of Your World", "Under the Sea", and "Kiss the Girl" from the film.

Some of the events in the series contradict the film The Little Mermaid III, which was released in 2008, such as Ariel's first meeting with Botje. It can be assumed that the series and this film take place in different continuities.

The episode "Metal Fish", which features a signed version of Hans Christian Andersen, is worth mentioning. In the episode he sees Ariel, which inspires him to write her famous fairy tale.

When making the redoubling of the Little Mermaid to the Castilian, the series was also doubled. The voices of the Castilian dubbing are:

The following are the songs that have appeared in the television series in chronological order:

"The Little Mermaid" is at the 5th Position in this list. 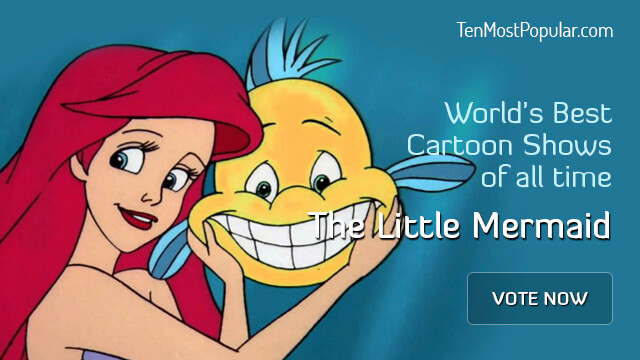