Motu Patlu is an Indian animated CGI comedy television series that airs on Nickelodeon. The series is adapted from the classic comic strip about Lot Pot. The series was launched on October 16, 2012, starting with the episode "John Banega Don". The series focuses on two friends, Motu and Patlu, who live in the fictional city of Furfuri Nagar. The director is Suhas Kadav and the music composer of the theme is Sandesh Shandilya. The producers are Deepa Sahi and Anish JS Mehta. The theme song "Motu Aur Patlu Ki Jodi" is sung by Sukhwinder Singh. Motu Patlu is based on characters made by Kripa Shankar Bhardwaj in the 1960s for Lot Pot Magazine. After the success of its First Season, Season Two premiered with the episode "Snow Park" and ended with the episode "Photo Shop". Then, the Third Season premiered in 2014 with the episode "The Devil Toothpaste". In Indonesia, the series was aired on Indosiar.

The series is based on the Motu patlu comic series that appeared in the Lotpot magazine. The first episode was broadcast on October 16 in 2012. It is one of the most viewed children's series in India. Motu Patlu is about Motu and Patlu, two friends who live in the fictional place Furfuri Nagar. In the series they end up in comic situations.

This story revolves around two friends of Furfuri Nagar, Motu and Patlu. Trouble comes over both of them and they both work together to resolve that problem. Motu is very much loved by Samosas. In the moments of his troubles, due to the love of his Samos, Motu keeps stealing from the day after coming from the best Samoshi man. At the same time, Patalu is always ready to help him.

In addition to these two, Ghasitaram, Inspector Chingam and Dr. Jhatka also help each other. When Motu eat samosa, then he becomes very powerful for a moment.

All of these, there is also a main enemy of all these, which is known as "John the Dawn", who always thinks of becoming a Don, but due to Motu and Tapalu, none of his plan is successful.

"Motu Patlu" is at the 61st Position in this list. 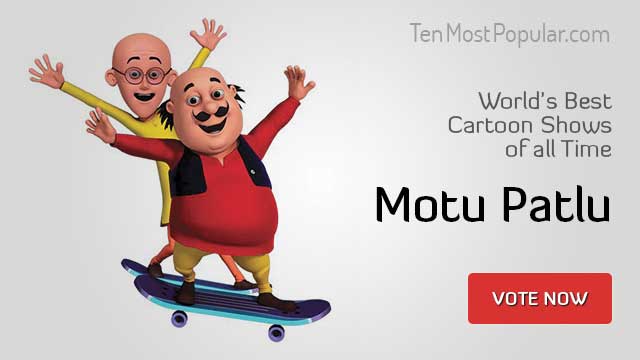