"Insects" (Insects, Little) (French Minuscule) - French animated television series of the Futurikon studio, consisting of two seasons. The first season consists of four parts, including 78 episodes lasting approximately 5 minutes each. The second season was released in 2011 and consists of 6 parts, including 98 series. The series was broadcast on France 5. The main characters of the series are various insects, the action of the series usually takes place in the countryside.

In 2013, based on the animated series, a full-length cartoon "Insects, Adventure in the Valley of Ants".

In February 2017, the filming of the second full-length cartoon MINUSCULE 2: LES MANDIBULES DU BOUT DU MONDE was announced. The release is scheduled for early 2019.

A feature of the footage is 3D animation, superimposed directly on the field shooting. The complete absence of dialogue in the series makes it accessible to any audience without translation or duplication. There are no violent scenes in cartoons (with the exception of accidents occurring mainly due to the fault of the characters themselves).

In cartoons, city noise sounds like abracadabra, without being tied to any language. Inscriptions on packs, bottles, etc., are also mostly meaningless. The ending of each episode is accompanied by a small musical composition.

Only the names of the series (and credits) are written in French (the language of the country of production) or in English (for foreign rental).

The animation series consists of a mixture of nature shots, mostly the background, and 3D animations. The plot revolves around the daily life of insects and other small animals. The series completely dispenses with language. The simple actions are underlined by gestures or melodies. Especially in fast flights and crashes of insects are often underlined sounds of aircraft, helicopters or motorcycles.

Two animated feature films in the series have been released in the cinema: Tiny: The Valley of the Lost Ants (2014) and Tiny 2: The Mandibles of the End of the World (2019), both directed by Hélène Giraud and Thomas Szabo. They take back some of the recurring characters in the series (the ladybug, the black ants and the red ants).

The environments are real, that is taken live, on the same are added the insects recreated in computer graphics, which have the body "almost" real (that is, faithfully reproduced) but with some detail from cartoon, for example the eyes.

Another peculiarity: the episodes are "silent", there is not even the narrative voice and only the sound of the "environmental" sound and the "verses" of the insects can be heard.

Humans are almost absent in the series, although several episodes are shot in a house or in the city, if a human being appears, his face never appears but is part of the environment (taken up in live action).

The ending of each episode is accompanied by a musical motif, which emphasizes the "moral" of the episode.

Futurikon, a French television company, is producing the series, the premiere took place on France 2 on October 25, 2006. At the end of May 2008, 78 episodes were released, each of which is an independent work with its own plot.

The series also has the full-length film "Insects. Adventure in the Valley of Ants" (2013). The premiere in the Russian Federation took place on May 1, 2014. The film tells about how black ants deliver a found box of sugar to an ant hill, simultaneously defending it from a detachment of red ants. The conflict escalates into a full-scale war and a siege of the anthill, but the ladybug, which the ants found in the box and quickly made friends with, helps to solve the problem.

The authors of the series are Helen Giraud and Tom Szabo, Philippe Delarue - producer of the series. Composer - Herve Lavandier.

"Minuscule" is at the 9th Position in this list. 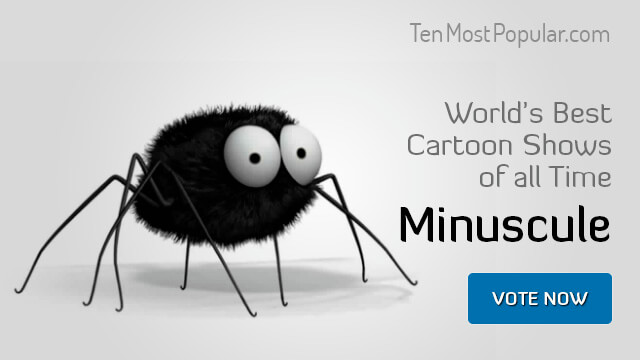 Total Votes: 1547
Votes received:76
Up votes:55
Down votes:21
5% Popularity
72% Up votes
28% Down votes
Go to voting page
Comments on Minuscule
Submit
Cancel
1 Comments
The only believable cartoon about tiny critters, like spiders, ladybugs, flies, snails and others. It's very cute and funny! And since it has real surroundings with the animated critters very well blended with reality, it makes children and adults alike more interested and less scared of the minuscule critters we share the world with!
0
0
Reply