Looney Tunes is a series of American cartoons from the Warner Bros. Animation, as well as a collective name for the characters from these films.

The short films of these figures were regularly seen in cinemas from 1930 to 1969. There are also comic strips, animated series and some films about the characters. The name Looney Tunes was intended as a variation on Disney's Silly Symphonies.

In the early years, between 1934 and 1943, Warner Bros simultaneously produced two series: Looney Tunes and Merrie Melodies. Looney Tunes was a series of black-and-white cartoons with a recurring cast, while the second series was Merrie Melodies, a series of color cartoon films with guest cartoon characters. Leon Schlesinger was the producer of many of the films. In 1935 the first permanent Looney Tunes character made his debut: Porky Pig. Bugs Bunny, the best known of the Looney Tunes characters, made his debut in 1940, although he initially became the Mare Melodies figures were calculated.

After 1943 there was gradually no longer a difference between Looney Tunes and Merrie Melodies in terms of content. The only difference was in the starting leader of both series. Looney Tunes is the most commonly spoken word when it comes to the collection of cartoon characters from producer Leon Schlesinger and the Warner Bros. Studios, the name Merrie Melodies is rarely used in this context. Sometimes the name Looney Toons is sometimes used incorrectly.

The original cinema films of the Looney Tunes were produced until 1969. During the 1960s, production was largely in the hands of DePatie-Freleng Enterprises.

In the 1950s, American television channels began broadcasting the Looney Tunes films on television. By the 1970s, however, these films were increasingly broadcast as children's programs, although they were not originally intended for that purpose. That is why in many cases the clips were adapted to remove scenes with violence or dangerous situations that were feared that children might try to imitate them. In 1987 a new series of cinema films was started to make the Looney Tunes known to a new audience. In addition, from the 70s to the 90s, some television specials were made around the characters. Most of them had Bugs Bunny and Daffy Duck in the lead role. In 1988 the Looney Tunes had guest roles in the cinema film Who Framed Roger Rabbit. In 1996, the cinema film Space Jam followed, in which basketball player Michael Jordan, among others, participated. The film was a commercial success and raised nearly $100 million in the United States. The success extended to television with series such as The Sylvester and Tweety Mysteries and Duck Dodgers.

However, the total number of figures that belong to the Looney Tunes is much larger. Most of these characters were popular for only a short time, and afterwards only had cameos in other Looney Tunes media. For a complete overview, see List of Looney Tunes characters.

The tune was always The Merry-Go-Round Broke Down by Cliff Friend and Dave Franklin at both the start and end leader, but the leaders were not always the same.

In the final leader, the world-famous text That's all Folks appears on the iris.

The cartoons were produced by DePatie-Freleng Enterprises in the 1960s. The leaders were also different. The initial leader had horizontal, vertical and two diagonal lines (the horizontal one being yellow and the rest pink) coming from the center of the screen. In turn, the three pink lines disappear and when the first two lines disappear, two triangles appear which together form the W and when the third line disappears, the B. appears. The yellow line forms the text PRESENTS about the newly created WB logo. Then a yellow and a pink line together reveal the text LOONEY TUNES, A WARNER BROS. CARTOON, TECHNICOLOR. The Warner Bros logo was also displayed on this screen. Incidentally, the tune was also something else. After this, the two lines 'collapsed' completely and disappeared again as four lines (3 pink, 1 yellow) in the center of the image.

In the final leader the two triangles that form the W appeared together with the B, over which the text A WARNER BROS CART OO N appears, where the two letters (in bold here) jump O three times. These were displayed in orange in the final leader.

In 1967 the logos were changed and all normal WB elements were replaced by the Warner Bros.-Seven Arts logo. The leader music was also adjusted slightly, but it was still recognizable. The background changed from black to blue, but the leader could still be compared to his predecessor. Here too the leader went with 4 lines, but the vertical and diagonal lines were now yellow and the horizontal orange. The yellow lines disappear at the same time and then the Warner Bros.-Seven Arts logo appears and the orange line forms the text PRESENTS. Then a yellow and an orange line together reveal the text LOONEY TUNES, A WARNER BROS.- SEVEN DOCTOR CARTOON, TECHNICOLOR. After this, the two lines 'collapsed' completely and disappeared again as four lines (3 pink, 1 yellow) in the center of the image.

The Warner Bros.-Seven Arts logo appeared in the final leader, over which the text A WARNER BROS.-SEVEN ARTS CART OO N appears, with the two letters (here in bold in italics) jumping three times. These were displayed in orange in the final leader.

Between 1937 and 1946, every cartoon ended with Porky Pig coming out of a drum and stutteringly saying "That's all Folks".

A handful of Looney Tunes and Mare Melodies films are no longer broadcast on American television today and are no longer for sale due to the fact that these films contain racist stereotypes of, among others, black people, Jews, Indians, Asians and Mexicans. For this reason, eleven films were withdrawn from circulation in 1968. These are nowadays known as "the censored 11". In 1999 all Speedy Gonzales films were banned because of the stereotype Mexicans that appeared in it, but after protests from Hispanics that they were not at all offended by the films, this ban was lifted in 2002.

"Looney Tunes" is at the 1st Position in this list. 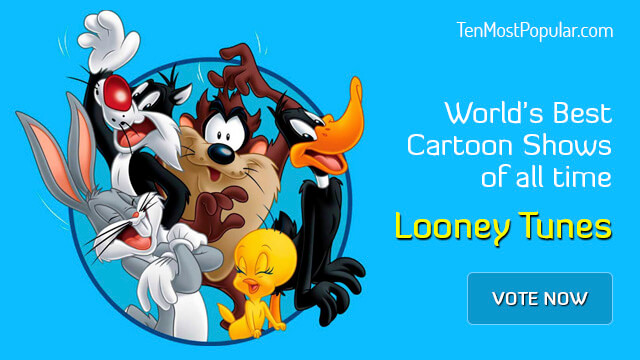