FacebookTwitterWhatsAppEmail
Cow and Chicken is a series of cartoons produced in the mid-1990s and created by David Feiss for Cartoon Network.

Cow & Chicken is about the adventures of two siblings, a cow and a chicken. Their parents are a pair of legs each without torso and almost always the brothers are tormented by the Red Man (Red Butt), a pathetic version of the devil who plays different characters in numerous episodes, and who almost never wears pants.

The series emerged in 1997 as the result of an animated short film aired on the What-A-Cartoon! (like Dexter's laboratory) in 1995 entitled No Smoking. The series also featured the characters of I Am Weasel, which were part of a recurring segment issued within the same series, and which later would go on to have their own animated series entitled I Am Weasel.

The series was nominated for an Emmy Award in 1998.

Feiss was one of the cartoonists called to send ideas for the series What a Cartoon!, dedicated to compiling several animations of various creators and writers of animated series, is how Feiss sent three ideas for an animated series, one of which was the Cow and Chicken short titled No Smoking, which was aired in the series What a Cartoon! in 1995.

After the broadcast, Hanna-Barbera decided to turn the short film into an animated series after the request made by many fans that there are more shorts of Cow and Chicken.

"Cow and Chicken" is at the 102nd Position in this list. 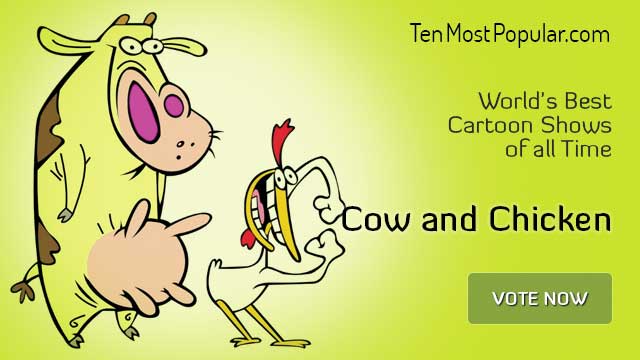