The beauty that participated in the Miss Earth contest from India, the first woman named is Shamita Sinha. Mumbai-born Shamita is currently a fashion model as well as VJ. Shamita is counted in India's supermodels and she can often be seen catwalking for fashionable fashion designers. As well as modeling, she has also shown her presence in the advertising world. Shamita worked with Abhishek Bachchan in Motorola's mobile phone advertisement. This face of fashion and modeling came to everyone's attention since 2001. In 2001, she won Femina Miss India title. Not only this, Shamita has also been Femina Miss India Earth.

2001 was the year when the international beauty contest Miss Earth began. It was Shamita's luck that she got the chance to represent India in the first year of this competition. Shamita participated in Miss Earth 2001 and India's name was also joined with Bolivia, Estonia, Latvia, Philippines and USA. Shamita won one of the six Special Award she got during the contest. This special award was for Best National Costume Award.

As well as modeling, Shamita is also known as an effective spokesperson and she is specially invited to various events in the industry. In addition, she has also done editing work in many papers. As beautiful as Shamita, her work is equally good. She is associated with the Animal Welfare Board of India as a Trustee. Apart from this, she has a very close relationship with Animal Care Foundation. She has propagated this consciousness among people that 'Be a vegetarian - save life'. Apart from this, She has also participated in the campaign against animal cruelty with PETA.

In 2003, during a fashion festival in Mumbai, when she became a judge, she again appeared in the news. In 2006, she got a lot of applause from Kingfisher's Photo-shoot for Swimwear Special Calendar - 2007. Shamita has been seen in various programs on TV from 2004 along with fashion and modeling. Where she has hosted many shows, she has earned a lot of name in acting too.

By the way, Shamita is a very resolved model, but the affair can be of anybody. Shamita also happened. Her name has been associated with British-Indian model and Bollywood actor Upen Patel.

Shamita loves writing poetry from school time, she currently writes for fashion and travel. Shamita has a sister, who herself is trying her luck in modeling. Shamita's younger sister name is Mashum Sinha. Masoom is known in India as a special swimshoot model. Her name has been added to Australian cricketer Shan Tate.

"Shamita Singha" is at the 62nd Position in this list. 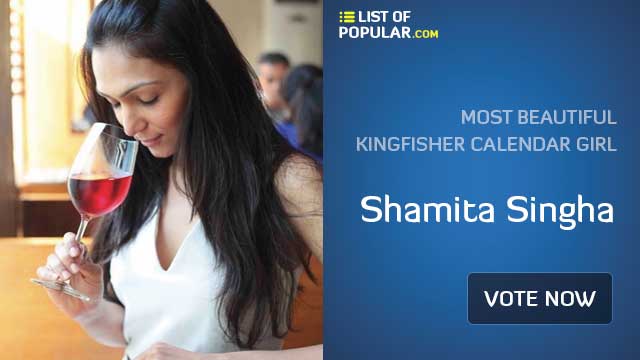