Nikii Daas is a top model, bollywood actress and beauty queen from India. She was ceremonial crowned winner at the Gladrags beauty pageant and later won the title of "Miss Charming" while representing India at the international pageant Best Model of the World in Turkey. Niki Das has been a top model before winning her audience heart through films. Nikki has modeled for big brands such as Toyota Innova Car and Donear Suiting.

She also appeared in several major commercials, prominent among them being Spykar Jean, Globus and Bombay Dyeing. Apart from this she was the face of many popular brands. She has also worked with Bollywood superstar and Mr. Perfection Aamir Khan in an advertisement for Toyota Company. Nikki has achieved a good place in the modeling world.

He has walked the ramp for designers like Satya Paul, Raymonds, Shakir Sheikh, Mark Robinson, Prasad Bidapa, Eric D'Souza, Lubna Adams and Viveka Babaji. Nikki gained great recognition after a photoshoot of the Kingfisher calendar. In the 2007 Kingfisher Calendar photoshoot, Nikki was also praised and made huge headlines with Bruna Abdullah and Mia Uyeda.

Apart from being a model and actress, Nikki Das has also been a beauty queen. Nikki Das was chosen as the winner in the Gladrags Manhunt and Megamodel India competition in Mumbai and later won the Miss Charm title. In 2013, she came on the big screen with a Kannada film Mandhasa. In the film 'Mandhasa', she was offered the role of lead actress. Apart from this, Nikki has many more projects that she is working on.

"Nikii Daas" is at the 1st Position in this list. 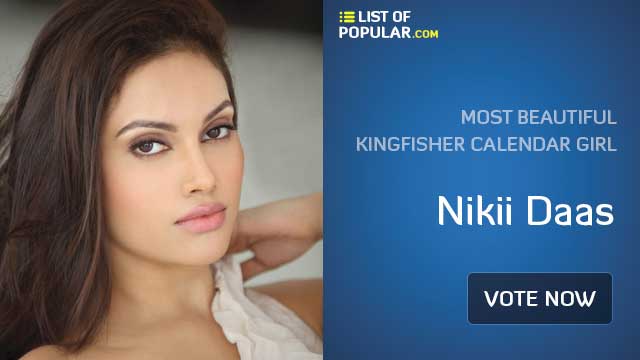