FacebookTwitterWhatsAppEmail
Sonu Nigam was born on 30 of July of 1973 in Faridabad, Haryana, India, Agam Kumar Nigam and of Shobha Nigam. He is an Indian musician and singer who sings mainly in Hindi and Kannada but also in other languages ​​such as Urdu, Oriya, Tamil, Assamese, Punjabi, Bengali. He has sung in many films of Shahrukh Khan in Bollywood. He has published many Indian pop albums and has also participated as an actor in several films. For some time he changed the writing of his name by numerology issues from "Nigam" to "Niigaam", but subsequently reversed it.

Sonu Nigam began his musical career at age 4 by supporting his father on stage with the song "Kya Hua tera Wada, Wo Kassam Wo Irada" by Mohammad Rafi. From then on he accompanied his father in performances.

His early years in Bombay were not easy. He started imitating songs by Mohammad Rafi, especially from the album "Rafi Ki Yaadein". The promoter of T-Series gave him the opportunity to reach a large audience. The album earned him his image as "Rafi Clone". His first song as a playback singer in a movie was in "Janum" (1990), but it was never screened. A turning point in his career as a playback singer came with the movie "Aaja Meri Jaan" by Gulshan Kumar. Then he sang the song "Accha Sila Diya" from the album "Bewafa Sanam" (1995), which brought him a definitive recognition in his career.

Sonu presented the television show "SaReGaMa", a TV show for musical talents like those that exist in many countries. This program became one of the most successful in India. The first episode of "SaReGaMa" aired on May 1, 1995. During those years he received more commissions to make playback songs. He got a lot of fame with his song "Sandese Aate Hain" from the movie "Border" (1997). Anu Malik was the musical director of this film. His image as "Rafi Clone" began to fade with the song "Yeh Dil Deewana" from the movie "Pardes" (1997). With this song he created his authentic and unique style and has become an idol for many young new musicians in India.

Over the years, Sonu became a driving force in the music industry in India. He is the playback singer of many Indian films and has received many different awards. "Kal Ho Na Ho" is the song best known and loved until today. Sonu is known for his versatile voice and for the wide range of emotions he is able to express. Sonu sings with a very clear pronunciation in several languages, such as Hindi, Bengali, Kannada, Panyabi, Tamil, Telugu, Marathi and English.

"Sonu Nigam" is at the 7th Position in this list. 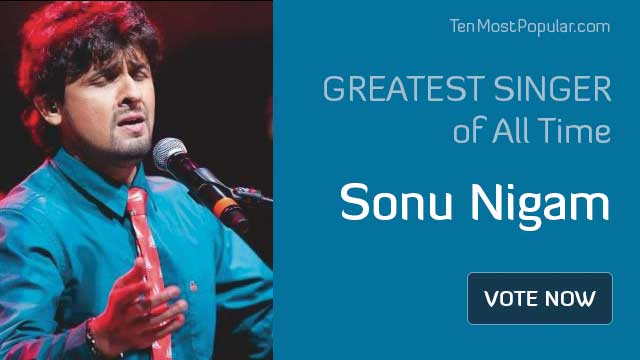