Mukesh's voice was very beautiful, one of his relatives Motilal recognized him when he heard him singing in his sister's marriage. Motilal took them to Bombay and let him stay in his house. Not only that, he made complete arrangement of Riyaz for Mukesh. Meanwhile, Mukesh got the role of the main artist in a Hindi film Nirdosh (1941). As a playback singer, he got his first work in 1945 in the film "Pahli Nazar".

The first song that Mukesh sang in the Hindi film was "Dil Jalta Hai To Jalne De" in which the lead character was Motilal. In this song, the effect of Mukesh's model singer K. L. Sehgal's effect is clearly visible.

In 1959, the Filmfare Award for best playback singing was received for the song 'Sab Kuch Seekha Humne, Na Sikhi Hoshiyaari' in the film Anari. In 1974, Mukesh got the National Film Award for the song "Kai Baar Yun Hi Dekha Hai" in the film Rajinigandha. In 1976, when he was on a tour of Detroit in America, he suffered a heart attack and died.

"Mukesh" is at the 9th Position in this list. 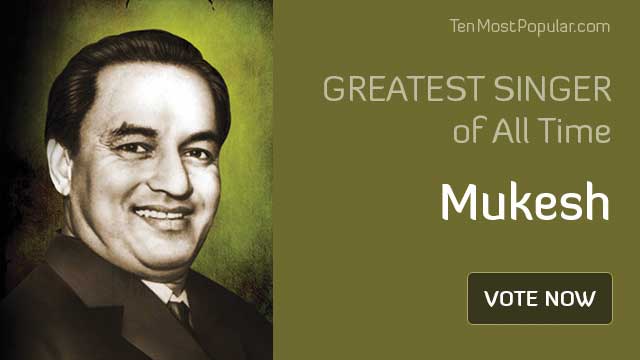